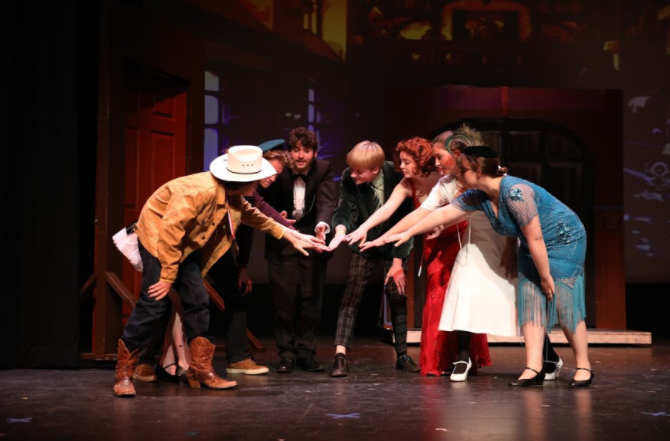 Though live performances are out of the question, forcing Carmel High School’s visual and performing arts department to shift online, CHS students are filming an online production of the play “She Kills Monsters” to be released on Padre TV in January.

“She Kills Monsters” follows young adult Agnes Evans who, after the death of her teenage sister, finds an old Dungeons and Dragons book and is launched into a world of creativity and self-discovery. Originally written in 2011, the play has been modified by the original author to be Zoom-friendly.

After rehearsals began in early November, drama teacher and director Gracie Poletti quickly realized connectivity would be a barrier, as actors’ screens frequently froze during rehearsals, making a live Zoom performance near impossible.

The cast began filming on Dec. 5. Poletti screen records the scenes that take place on Zoom, while cast members are responsible for filming some of their scenes. For the play’s fight scenes, Poletti ordered and distributed six green screens for some cast members, who had to find space in their homes to hang the screens and film.

“When we are doing the individual scenes with the green screens,” Poletti explains, “everyone has to record it themselves either on their computer or their phones, and then we are all sending the footage to a common folder.”

The raw footage will be edited together by Poletti’s eldest son, Cameron, who recently graduated from film school.

Last year, the seniors ran a virtual read-through of the musical “A Very Potter Sequel,” the first attempt at a virtual drama production at CHS, though the play was never recorded or performed for an audience. Junior Aydeen Reed participated in that read through and enjoyed it, which prompted him to audition for “She Kills Monsters.” He notes that rehearsals on Zoom are more structured than in-person rehearsals he attended for productions in years past. However, he finds it more difficult to establish a character.

“I’m in my home, in my room sitting on Zoom, so sometimes it just feels like a class,” Reed notes. “You can just turn off your camera when you’re not acting.”

Junior Caleb Roehrig also finds that Zoom rehearsals less natural and more like conference calls. He expresses missing messing around and having fun like they would in typical rehearsals.

As for blocking, Reed, who plays the narrator, often turns his camera off and leaves his mic on for his voice overs. Actors turn their cameras off when they exit the “stage.” Poletti also instructs actors to lean into the camera at certain times or to simulate walking.

For typical productions, costumes would be sourced from a large collection of costumes the school has accumulated from performances over the years. For this play, costumes are mostly sourced from what the actors have available to them, and Poletti has gathered some props and costume pieces to fill in the gaps.

Roehrig believes that despite the obstacles, keeping the ability to perform is essential, even over Zoom: “No matter whether or not we can be in person, you can’t kill people’s ability to create.”

Because the performance is not live, Poletti and the cast have no strict deadline. Poletti hopes to release the finished product in early January on Padre TV, the high school’s streaming service for student performances. There will be no price to watch it, rather a ”donate” button so viewers can support CHS theater.