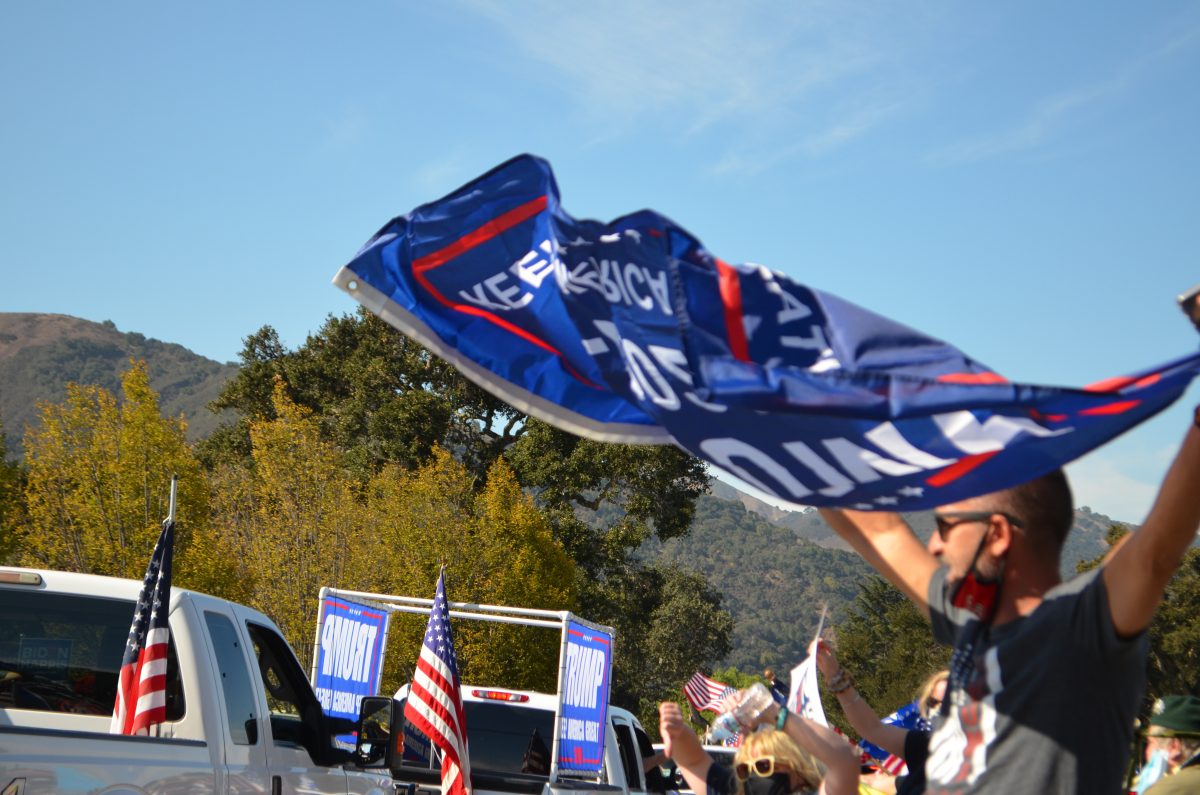 Trump supporters and their vehicles lined Carmel Valley Road from Plaza Linda to Cachagua in preparation for a vehicular parade heading west throughout Carmel and Monterey Bay on Sunday.

Biden supporters lined the opposite side in protest.

In the moments leading up to departure at noon, demonstrators could be heard chanting, yelling and revving engines throughout the plaza. As a microcosm of division at the national level, Carmel Valley Road served as a barrier between two well-defined sides of the political spectrum.

“I am here because my family and I support our president, his values, his morals, his love for God and his initiative in getting things back to being right,” said Trevor Pillington, an employee for Online Fence. “Our president, like a true leader, went in and went through COVID-19. He came out strong, and he told us ‘Don’t live in fear of this.’ He proved that everything they’ve said is a lie.”

While Pillington waved flags and danced to music, Carmel High freshman Malia Stoney stood next to her mother and approximately 50 others in protesting the Trump rally.

“Our generation needs to be heard,” Stoney said afterward. “I felt anxiety and sadness, but also a feeling of empowerment standing among people with the same beliefs and hopes for our country as I do. Everyone in the valley that day seemed to sort of agree to disagree. However, there were moments when I was scared.”

Stoney was scared because a woman swerved her vehicle at Stoney as if she were pretending to run the student over, and throughout the course of the afternoon, Stoney was called a range of names and profanities.

Such profanities were launched from those on both sides of the political spectrum.

“We need to represent how the locals actually feel considering that many of these people are from out of town. This is not our community. The village is better than this,” said Bobbi Pfeiffer, a 2020 Biden supporter. “I organized our response to this rally.”

On social media, Pfeiffer posted that she was going to be in the village to stand against hate and represent her people. She told her followers that they were welcome to come join her.

On the pro-Trump side, Jeffrey Gibb, an eco-wellness resort entrepreneur, like many of his fellow demonstrators, said he believed President Trump is the leader America needs and the presidential candidate to bring America out of the pandemic-caused economic rut.

“Everything hinges on economics,” Gibb says. “Donald Trump looked at this political system or bureaucratic swamp and said, ‘I can do better.’ He gives a businessman a chance to move forward on the economic agenda.”

When asked about his personal business model of eco-wellness, Gibb referenced the idea that without the ability to sustain oneself economically, nothing else can be done.

“Why is there emphasis on the environment over just meeting the basic needs of a household?” he observed. “Donald Trump is a genuine capitalist, and as a fourth-generation California resident, my dream can be achieved only through capitalism. My dream is with Donald Trump and his policy, with this great country of freedom and transparency.”

After leaving the valley, Trump supporters paraded through downtown Carmel and across the Monterey Bay area before returning with the same attention-grabbing fervor they had left with. The vehicular parade ended back at the plaza.