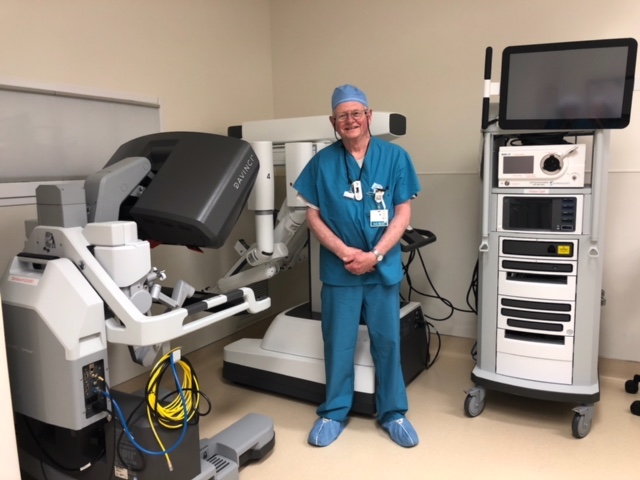 The next time you have a surgery at the Community Hospital of Monterey Peninsula, it could be done by a robot.

“From October 2019 through January 2020, the da Vinci robot has been used on 20 surgical cases, all with exceptional outcomes,” says Dr. Steven Cabrales, vice president of medical affairs at CHOMP.

The da Vinci combines laparoscopic, or minimally invasive abdominal surgery techniques, and “open” surgery techniques to make for a more precise surgery. It mimics the movements of the surgeon’s hands so it can bend, grab, move and twist as the surgeon does. As for the tools, there are scissors, graspers, needle holders, cannulas and telescopes. Cannulas are inserted into the body and serve to hold the other tools.

With the typical laparoscopic surgery, surgeons use “straight sticks” to do a surgery and have a 2D field of view on what they are doing. The da Vinci offers a different option, giving a high definition 3D field of view, allowing them to see their work more clearly than before.

CHOMP is currently using the da Vinci for gynecological and urological surgeries, and there are four surgeons who are qualified to use the da Vinci. In order to get qualified, the surgeons and nurses working with the robot must go through training, which involves a simulator program and practice on dry models and pigs under anesthesia.

“In the beginning it was really hard,” robotics program coordinator Martin Randle explains. “We went with the surgeon to learn at the same time how to support the doctor and how to help them with the things that they needed.”

The retail cost for a da Vinci is nearly two million dollars. Community Hospital has a dedicated da Vinci operating room that can be used for other non-da Vinci surgeries when needed. The cost to run the operating room is the same as traditional laparoscopic surgeries, with the exception of the supplies, both reusable and disposable.

Though surgeries may last longer, there are benefits for both patients and surgeons. For surgeons, there is much more precision and accuracy than in the average surgery without the da Vinci robot. Since there are smaller incisions, patients experience less blood loss, less pain, a shorter hospital stay, reduced scarring and a faster recovery.

“One advantage is patients had to go elsewhere,” Randle says. “They couldn’t get this locally. Now we offer it to our local community. It’s something they don’t have to leave town for.”

CHOMP will be holding an open house for the da Vinci robot on March 31 where the company that makes the advanced surgery tool will be providing a demo robot for a hands-on public experience.