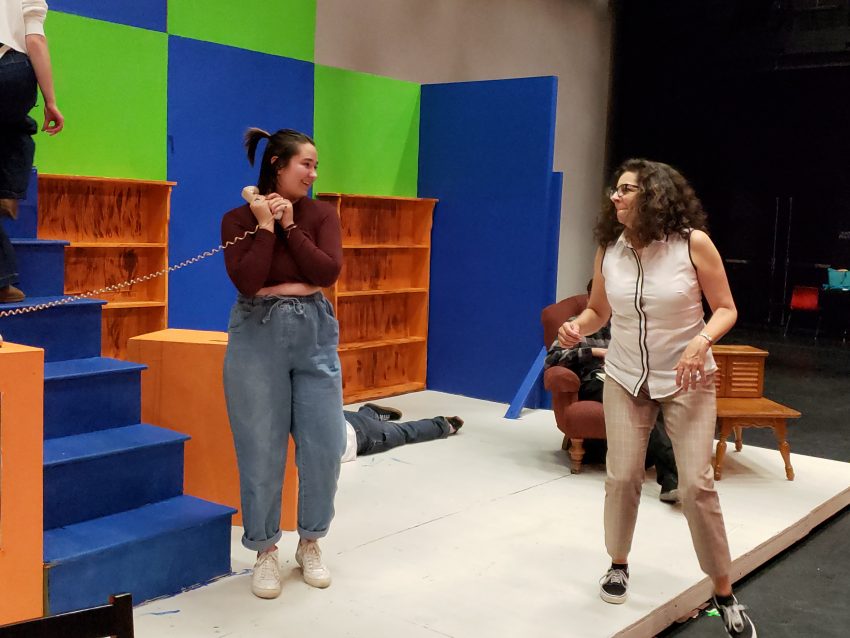 The upcoming Carmel High School drama production “Bye Bye Birdie” begins with some big news for rock star Conrad Birdie: He has been drafted into a war and will be forced to leave in the near future. The 2019-20 school year also began with some big news for the students involved with that production: Drama teacher Gracie Poletti would be leaving for Los Angeles to resume her career as a professional actor at the end of the year, making “Bye Bye Birdie” the final production Poletti will be directing on campus.

“It’s bittersweet,” Poletti says. “I’m sad to be leaving because I adore my students, and this job is so much fun, but I’m excited to get on with a new chapter in my personal life.”

“Bye Bye Birdie” will open March 13 at the Carmel High School theater and serves as a farewell for Poletti, who first began teaching drama on campus in 2016.

“I definitely wouldn’t be as good of an actor as I am today if Gracie wasn’t there to coach me,” senior says Jacob Buzza, who, like senior Libby Lambert, cites an intense focus on technical skills as instrumental to Poletti’s strength as a teacher and a major reason for their improvement.

Poletti also brings a certain character to each production with her directing.

“I’ve been in every show she’s directed here, and every time she amazes me with her ideas and her creativity,” says senior Yvonne DiGirolamo, adding that Poletti has helped her with her own acting pursuits, helping DiGirolamo prepare for and record monologues as part of various auditioning processes.

The plot of “Bye Bye Birdie” focuses on Albert Peterson, Birdie’s manager, and his secretary Rose Alvarez trying to pull one last publicity stunt, a kiss on live television with one lucky fan before Birdie is sent to war. This, alongside the romantic plotlines presented throughout, forms the basic foundation for the commentary that the play provides.

“It’s about finding yourself and not letting other people bring you down,” Lambert says. “You need to be able to assert yourself and choose your own path.”

The core message of the play is dynamic. To some, like senior Jeremiah Lamph, it’s about generational conflicts, and to others, like sophomore John Campo, it’s about learning from mistakes and moving past them. Others see it as a commentary on the nature of musicals themselves.

“It’s a spoof of the typical structure of a play,” senior Hanna Richmond says. “It comments on how the female and male roles are usually portrayed in musicals.”

This deconstruction of the musical genre is a large part of the play’s appeal.

“It’s tongue-in-cheek,” Poletti says. “It’s not a super serious depiction of the ‘50s, and there are a bunch of ridiculously silly moments, which makes it a very fun comedy to both do and watch.”

Poletti worked as an actor for 22 years in Los Angeles before moving to Carmel where she continued acting in local productions and holding positions like the director of the Pacific Repertory Theater’s School of Dramatic Arts. With her youngest child graduating from CHS at the end of the year, Poletti hopes to return to where it all began.

“I hope the last lesson I can give my drama students is to pursue your dreams and go for it, no matter your age or the risks,” Poletti says. “I hope they can take that to heart.”

The students Poletti leaves behind will miss her.

“It’s going to be hard to find a replacement,” Campo says. “No one can really replace Gracie.”