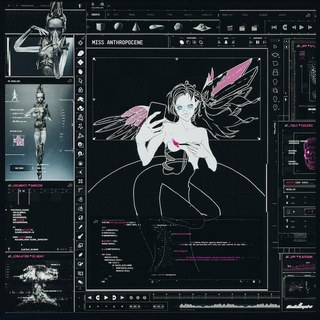 Grimes has spent much of her career posturing as a whimsical, above-it-all fairy with a patently high voice and an odd amalgamation of influences ranging from Björk to anime soundtracks, yet her first album as a full-time pop diva can’t help, but get lost in the world she’s created around her.

The singer says she “wants to make climate change fun,” but let’s ignore tone deafness of lamenting climate change while dating a tech billionaire (Elon Musk, if you aren’t savvy on celebrity relationships) and judge the songs on their merits. “Darkseid,” a glitchy, thumping beat, features disorienting verses from Taiwanese rapper PAN, with a glitchy and apocalyptic refrain where Grimes laments her unrest.

Bollywood influences come to the forefront on “4ÆM,” a cyberpunk jam for those who long for a dystopian future where robots control what we listen to. Maybe Grimes herself is the robot: She coldly addresses climate change from the perspective of somebody who looks down on the rest of us mortals, making the whole thing feel distant, disengaged. Taking a stand against climate change in the current year is about as uncontroversial as coming out against kicking puppies, so how is this concept transformed in any meaningful way?

More traditional instrumentation takes shape on “Delete Forever,” which trades the in-your-face attempts at artpop for something a little more digestible. It’s here that Grimes’ voice truly shines, an elegant falsetto which glides against the sparse acoustic guitars—an odd choice, but certainly a welcome one between heavy soundscapes.

The cultural zeitgeist has certainly shifted in favor of moodier, more introspective songs with mental illness at the forefront, and Grimes is no stranger to this concept: “My Name is Dark,” with its ridiculously crowded wall of sound and piercing vocals, feels like the musical embodiment of an intrusive thought. Where Grimes’ voice sounds nice over sparse instrumentation, she’s also no stranger to shouting over a ridiculous amount of noise, making the song sound as though you have twenty YouTube tabs open at once and hit play on all of them simultaneously.

The album’s closer, “IDORU,” is a shimmering, glittery pop song which feels kind of like the closing credits to a dystopian film. There’s no denying that Grimes is one of pop’s most transformative chameleons, and while the album’s mixing and message both feel convoluted at time, there’s a certain honesty to the artistic experience of a Grimes record that very few artists manage to capture.