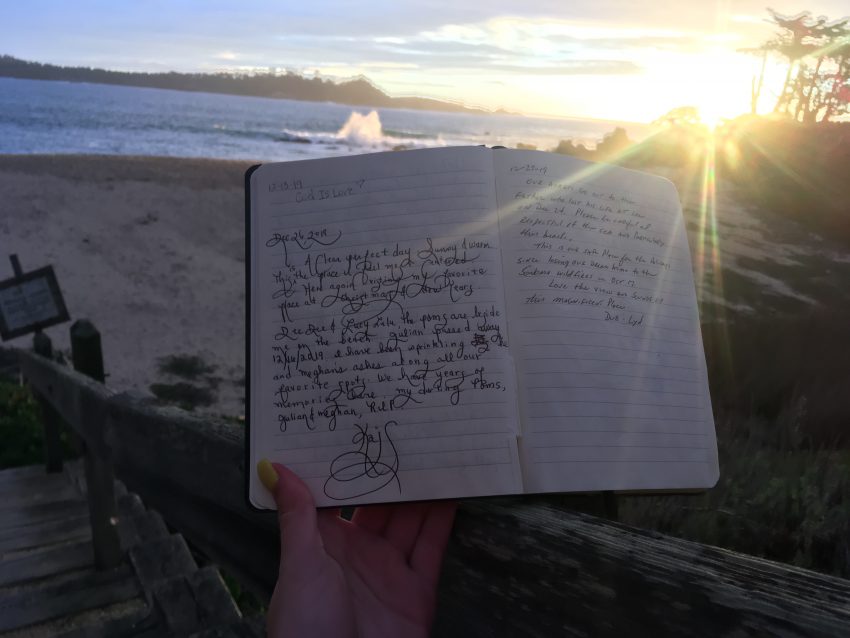 There’s a bench along Scenic Avenue that overlooks the gray-blue lagoon of Carmel River State Beach. Not many people notice that underneath is an ordinary black mailbox—however, what’s inside is anything but: seven neatly packed journals, holding the musings of hundreds of tourists and locals who had found this bench and left their stories for others to share and add to.

A few of the journals date back to 2015, with some entries pages long and others only a few lines. People share wedding anniversaries, life changes, photographs, names and memories of their loved ones who’ve passed away.

Why is this bench there? It was installed in 1992 by Marcia McGinnis, dedicated to her parents, Bob and Gert McGinnis, and her brother, Bob McGinnis Jr.

Thirty-one other benches on Scenic hold the same significance: They, too, are dedicated to members of the Carmel community who’ve lived and died here, including two of the most recently installed benches in honor of Braxton Stuntz and Howard Brunn, and one installed 10 years ago for Ryan Field and Alexander Robbins.

An 18-year-old college freshman, Stevenson School alum and avid photographer, Braxton Stuntz passed away in January 2019 in a tragic accident after falling into a blowhole during a Big Sur hike. His loved ones gathered together at a ceremony last December to remember Stuntz and see the dedication of the bench.

“It’s going to be a place where his family and friends can come in his honor,” his mother Ruth Stuntz describes. “When someone dies, you don’t want anyone to forget the person…so it’s just trying to keep his memory alive.”

In addition to the bench, Stuntz’s parents have also set up the Braxton Stuntz Foundation to continue his lifelong passion for helping others⁠—both at home in Monterey County and abroad in Cambodia, where he worked as a relief volunteer.

“We just started based on the things Braxton did and that he cared about and it just went from there,” Stuntz’s mother explains. “I guess that’s all you can do. You try to do good things in [his] name.”

Ruth emphasizes the significance of the bench’s location, which in its position overlooking the bluffs of Carmel Beach stands as a reminder of everything Braxton had loved to do.

“It’s beautiful,” she says. “It looks to the left where he used to play with his friends and have Boy Scout beach parties. Then look to the right and you see Pebble Beach, where he used to fly his drone, so it’s a perfect location.”

A few streets away is the bench dedicated to Howard Brunn. His daughter Vance Killen shares that his roles as a local poet, World War II pilot and Carmel City Council member are just a few of the ways he contributed to the community over his 92 years as a resident.

“[Before Howard] passed, he didn’t ask for anything other than a bench,” Killen describes. “People that visit Carmel or people that live here can just sit here on his bench and enjoy the beauty, take a moment. We all need to take a moment. So that’ll be there forever, and I don’t think there’s anything more powerful than that.”

Killen notes the compelling connection between her father’s time on city council and his bench: When Scenic Avenue was changed from a two-lane road to a one-lane road, Brunn was part of the effort to install the now well-beloved path and the benches along it: “The connection and the big circle of life just felt like the perfect opportunity for Howard.”

The bench built in honor of Ryan Field and Alexander Robbins is another important benchmark on this path along Scenic. Ten years after its dedication, it remains a place of remembrance for the Carmel High students who died in a crash car off the Big Sur cliffs in 2006.

“It was something that was going to be there forever. Ryan’s 11th Street surf spot was his favorite place to be,” says Jennifer Field, Ryan’s mother. “On the other hand, it’s hard to see [it] in ways too. It’s just a confirmation that this bench was put in because my son is no longer here.”

Whenever she can, Field tries to keep her son’s memory alive, whether it’s through visiting his bench on runs, giving out an annual award at CHS’ track and field banquet in Ryan’s name or through educating teenagers about the dangers of driving.

Visitors to Ryan’s bench may also notice a laminated card called Ryan’s Wish, a short passage which describes who he was—it was read at CHS’ graduation of the Class of 2007. In the cement stands on either side of the bench, there are seven heart-shaped rocks that Ryan collected for his mother on Carmel Beach after surf sessions.

“I’ve met so many wonderful people down there, and it just brings me such hope and it gives me peace to know that these people are sitting on my son’s bench,” Field explains. “I like to tell the story to people. It reminds people of how short life can be, to live in the moment more and to appreciate what they have. It means a lot to me.”

As assistant planner for the City of Carmel, Catherine Tarone helps families like Field’s to navigate the process of acquiring a bench, sharing what her work means to her: “It’s a place where families like to visit to remember them, especially those two [recently constructed] bench locations along the ocean,” she says of Stuntz’s and Brunn’s benches. “It’s very meaningful and introspective. It’s meant a lot to me to help individuals make that a reality. It’s one of the fulfilling parts of the job.”

Carmel residents can apply to build a bench or to place a plaque on an existing one put in by the City of Carmel. Those who choose to build a new bench have to cover all the costs themselves.

Since it started many decades ago, Carmel’s unique tradition of commemorating benches along Scenic Avenue will likely continue for decades to come, as people will always look for ways to remember and honor loved ones who’ve left their mark.

You can donate online to the Braxton Stuntz Foundation at his GoFundMe page or sign up for updates on his webpage, braxtonstuntzfoundation.org. Those interested in acquiring a new bench or a plaque can visit Catherine Tarone at her office in Carmel’s City Hall on Monte Verde Street.