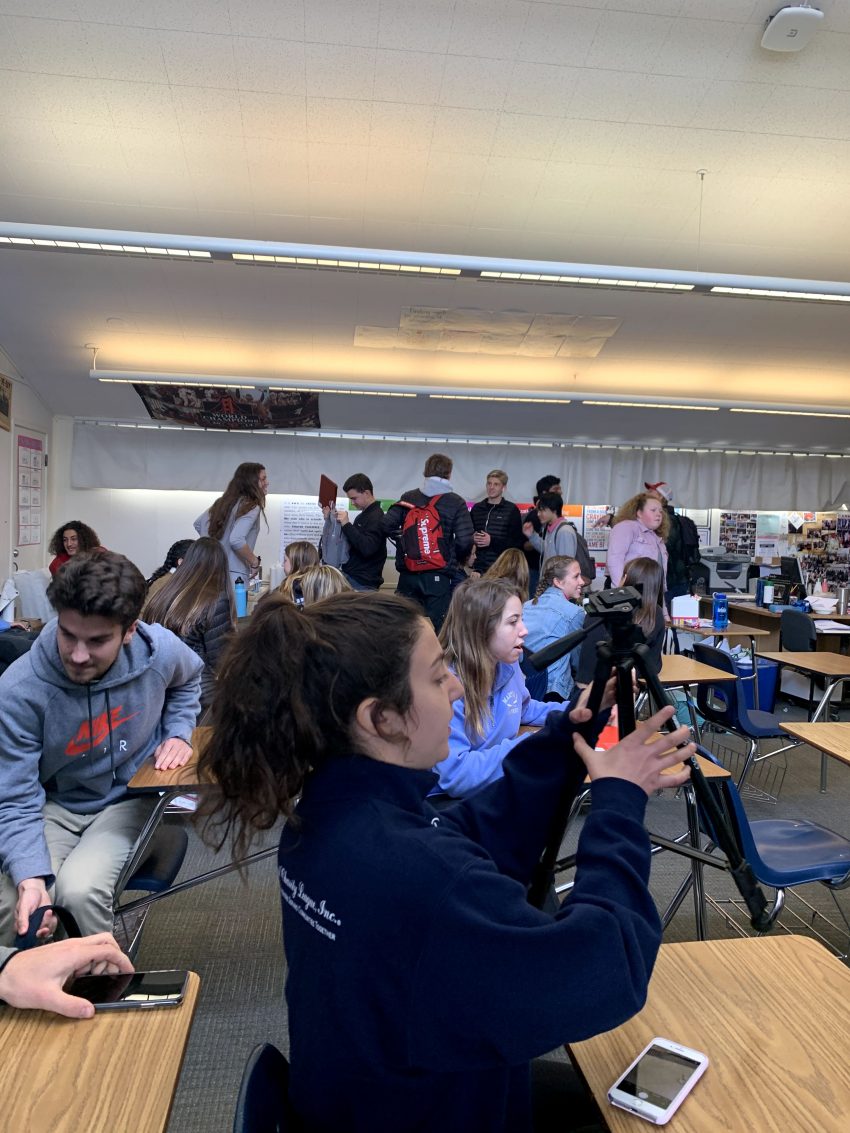 Five years ago, Carmel High Leadership teacher Aubrey Powers found herself with roughly 20 students in a small portable classroom near the pool, charged with the task of putting on events for a school of 850 students. This year, 50 students, ranging from freshmen to seniors, joined Powers’ Leadership class, an exceptional number of students to complete the various tasks that face the Associated Student Body, but a taxing load for a teacher to manage alone.

While the number of students in Leadership has nearly tripled since 2015, the class is still held in a room built for fewer than 30, causing Powers to cap next year’s class at 40 students through an application process consisting of an interview and a paper application.

“It’s always been about half the number it is now, maxing out at around 20 or 30,” Hendricks explains. “When we’re all in there, there’s no way to keep it quiet. People are sitting anywhere they can, and it’s just loud.”

A visitor entering the class would be immediately presented with a room of almost 50 teenagers sitting on whatever surface they can find, brainstorming ways to improve school spirit and carefully planning school-wide events. Broken up into teams, Leadership students disperse around campus to accomplish their daily tasks, alleviating some of the pressure from the single classroom.

“It’s challenging not only because of the number, but because of the nature of students being in different Leadership entities,” Powers says. “We’re going in 11 different directions. There’s an executive group and commissioner positions, so space can be an issue with that.”

Nine elected class officers and 20 commissioners constitute a majority of the class. To ensure a wide range of opinions and voices are heard, Powers seeks to leave ample room for students without a designated, elected position to join.

“Most of the executive and commissioner positions are filled by kids who are juniors and seniors, so they take up a large number of spots in the class,” Powers says. “We try to balance that with underclassmen and people who weren’t voted into an office to get a cross section of different ideas and get people involved.”

Increased interest in joining the class has provided ASB with a wider array of input and opinion in addition to allowing greater development of committee teams. Due to the creation of newer roles such as documentarian and commissioner of creative changes, the class has expanded to include those students.

While the increase has helped ease officer workload and promoted a more diversified approach to Leadership at CHS, some feel the class is too large and express concern over a lack of initiative and unmet potential.

Other members of the class share this sentiment, noting that some classmates sit idle and jobless during fifth period.

“There are a lot of people who don’t have a specific job and are just kind of sitting there,” says Elise Head, a junior in Leadership.

Powers disagrees, explaining the class has grown through the expansion of positions, which has enabled ASB to devise and plan more events than ever before.

“It hasn’t necessarily created inefficiency because at the same time it has created and expanded a role for somebody that didn’t exist three years ago,” she explains.

Yet in an effort to reduce the class to a more manageable level and promote better group focus, the new application process may be introduced as soon as next school year.

“I think that there should be an application for first-year students, but anyone who has been in Leadership, and who the teacher hasn’t had a problem with, should be able to stay in the class,” Hendricks says.

While adding an application may help ensure that only students who are dedicated and focused participate, it raises possible negatives. Some fear the process could turn potential members away for fear that they may not get in, or simply because of the extra hurdle to join the class.

“An application might make people think it’s too serious and not want to apply,” freshman Isabella Cardinale says. “I don’t know if I would have joined if there were an application. It might intimidate underclassmen especially.”

Not wanting to exclude a student who could benefit the class before getting a chance to know them, Powers had been hesitant to cap the class, but insists it is a necessary change in order for ASB to function quickly and effectively. She emphasizes that the ideal class size is 40, but she needs to maintain a diverse array of students from all grades.

“It’s Leadership, and I feel like it needs to be representative of the student body,” Powers explains.  “It’s a hard balancing act to find the best scenario.”