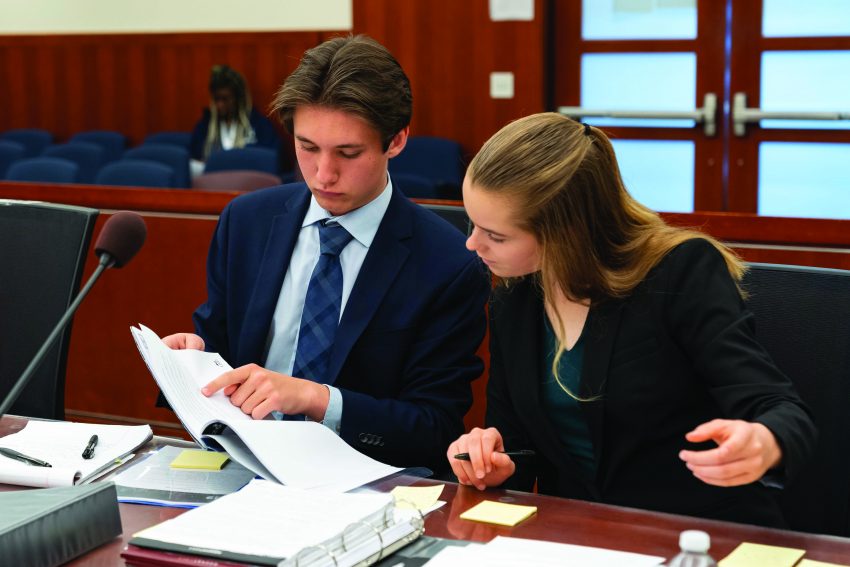 Ethics Bowl, Robotics, Mock Trial, Model U.N. and Science Olympiad are five academic clubs at Carmel High School which focus on STEM, debate or the judicial system. More academic clubs are emerging as student interest is growing, but why do students choose to join these programs?

Generally for two reasons: Because the students are passionate about that particular field of study, or because participation in these clubs looks good on college applications.

“Most people are authentically involved in Science Olympiad,” says junior Sierra Seifert, the club’s president. “But there are definitely some members who are there only for college applications.”

According to teacher coaches, students joining for purposes of college applications is nothing new.

“I joined Mock Trial because my friend’s sister was the president and [history teacher Bill] Schrier was the coach, but I think that college was also a factor,” says Alex Poletti, 2018 CHS graduate and Mock Trial alum. “I think that Mock Trial was the most impressive part of my application.”

According to college counselor Darren Johnston, being a part of an academic club such as the ones offered at CHS doesn’t necessarily make a person stand out on a college application.

“All these kids who join clubs thinking it will carry weight…should know it’s a scam,” Johnston explains. “Admissions officers aren’t ignorant of how high school functions.”

“College admissions officers aren’t looking for joiners, they’re looking for doers,” Johnston says. “It’s not so much the club, but the amount a student is involved in that club, the action they’re taking as a member or participant. To colleges, that means leadership.”

Rigorous and intensive, these clubs demand commitment from their members, which ultimately creates for a cohesive team of students.

“Our team works really well together,” senior Robotics member Marcus Lo says. “We do a lot of collaboration. We eat together, build together and treat each other like a family. It gives people a bigger reason to stay.”

The hard work of these committed individuals can be seen in the success of each program. In January, the Ethics Bowl team proceeded to the quarterfinals in their annual tournament, where they debated the ethics of morally contentious situations.

Similarly, Science Olympiad and Model U.N. are in the process of preparing for annual competitions, while Mock Trial is defending its six-year victory streak at the Monterey County competition in early February.

“I think the hardest part of preparing for competitions is budgeting our time and getting enough members to contribute to the team,” Lo says. “Each member has a unique role within the team, so we always need hands on board.”

Club members say that it’s their fellow members who are the highlight of the club experience.

“The people were the best part of Mock Trial for me,” Poletti says. “I think that’s the best part of any experience, the human connections you make. I made a lot of friends, people who I still know today.”