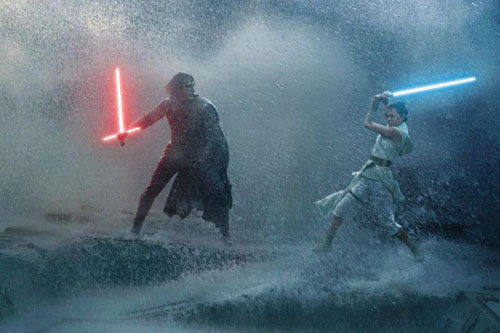 “The Rise of Skywalker” was doomed before it even hit theaters, forced to battle the looming expectations of a diverse fan base wanting the perfect end to an iconic series. Yet with a franchise that built itself so big as to condemn itself to impossibly high standards and inevitable disappointment, director and producer J.J. Abrams still manages to construct a gripping closing to the sequel trilogy.

Rey (Daisy Ridley) develops her powers with rigorous training as she begins to recognize her true potential, making her into a far more intriguing character than the one audiences first met in “The Force Awakens.” Alongside her, fan-favorites like charming Finn (John Boyega) and witty Poe Dameron (Oscar Isaac) finally get their deserved screen time that “Force Awakens” and “The Last Jedi” denied them.

“Rise of Skywalker” has its merits: It stays true to the original films, but takes risks by introducing new characters that bring lightheartedness to the story, as well as by offering closure for Carrie Fisher’s iconic Princess Leia and effectively completing many of the characters’ arcs.

Much of the criticism directed at the ninth installment involves three main points: The movie leans too heavily on old storylines, introduces sloppy twists and leaves plot points unanswered…but only the latter of the three truly holds water. “Star Wars” has always been a franchise that rests on old storylines to avoid alienating die-hard fans, or at least reinterprets previous plots—“Rise of Skywalker”is no exception to this. As for the twists, they don’t detract from the film but rather add necessary, crucial depth to the characters. The discovery of Rey’s true identity rounds out her character arc, giving her more complexity, supplementing the significance of her mission and providing for the ultimate emotional catharsis at the end.

Now, that’s not to say the movie lacks messily constructed scenes and plot points. More than a few questions are left on the table, including several unresolved plot holes. Some of the side characters add nothing but irrelevant dialogue and humor that wildly misses its mark. And amid an otherwise tightly developed storyline, a couple conflicts arise for roughly two minutes before being clumsily squashed or even flat-out unaddressed.

Despite facing the horrifying obstacle of bringing closure to a universe of legendary characters, Abrams proves capable of tackling the unenviable task, providing a fiery and satisfying finale with “Rise of Skywalker”that holds its weight among the other “Star Wars” films and successfully concludes the franchise.