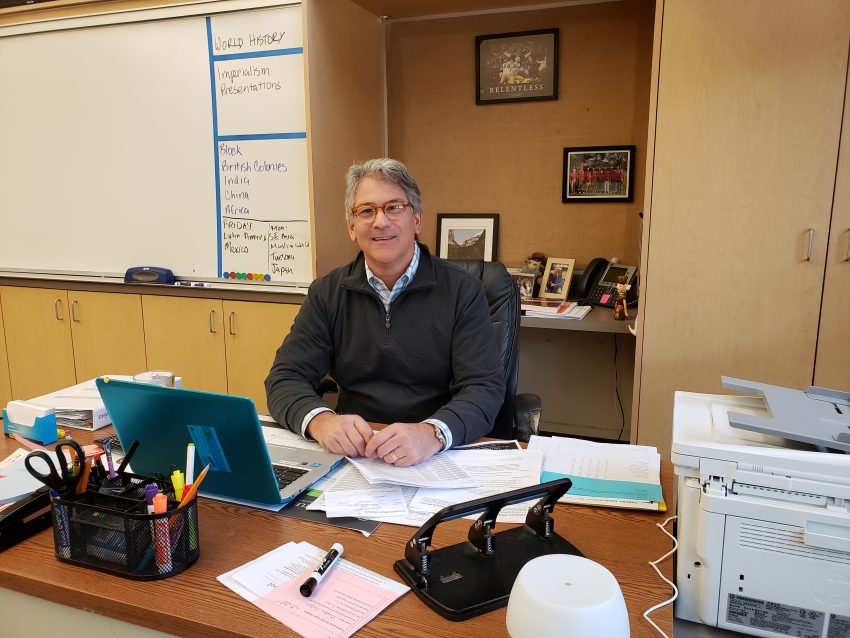 Students stepping into Room 32 for the first time after winter break were introduced to Bruce Dini, a coach and teacher for over a decade, who will be teaching World History and Geography as Jillayne Ange’s replacement until the end of the 2019-20 school year.

“The kids have been great,” says Dini, who cites support from fellow staff and administration during the transition to his current position. “The students have been very gracious in welcoming me into their classroom.”

After 25 years in the business world, Dini enrolled in a teaching education program. He worked at Stevenson for 10 years, teaching history, economics and leadership courses as well as serving as the head football coach. Dini coached lacrosse at Carmel High School from 2003 to 2009, and after earning his teaching credential, he worked as a substitute teacher at Carmel Middle School.

The substitute’s arrival coincides with the departure of Ange in December. The substitute is aware of the role he’s filling on campus; he mentions reading the Sandpiper’s article on Ange’s departure and being impressed by her status on campus.

“If I was just going through the motions, going, ‘Yeah I’m just the sub for history, here’s the agenda Mrs. Ange gave me,’ I think that would be disappointing to the kids,” Dini says. “I’m not Mrs. Ange. No one could do it like she did.”

His reception on campus has been positive. Among students, many comparisons are made to the teacher who came before him, but students have positive impressions. Fellow CHS staff also recognize that the replacement has a lot to bring to the table.

While Dini will be following the same general topics and course structure as Ange, he has taught world history for years and hopes to bring some of his experience and original material to the course.

“It’s a balancing act,” the substitute says. “I want to respect the work that Mrs. Ange and the kids have done, but at the same time ask myself, ‘What can I bring to the course?’” For example, Dini intends to do more work with primary source documents, especially in areas like U.S. foreign policy in the Middle East.

After decades as a career businessman, Dini decided to pursue a career as a teacher.

“When I first was questioning whether I should teach as a career, I was coaching at Carmel,” Dini says. “Then Principal Karl Pallastrini encouraged me to get a teaching credential, which was hard to do later in life.”

Luckily for Dini, he feels he made the right choice. He enjoys teaching and coaching immensely, and he says he plans to continue doing so for as long as he can.