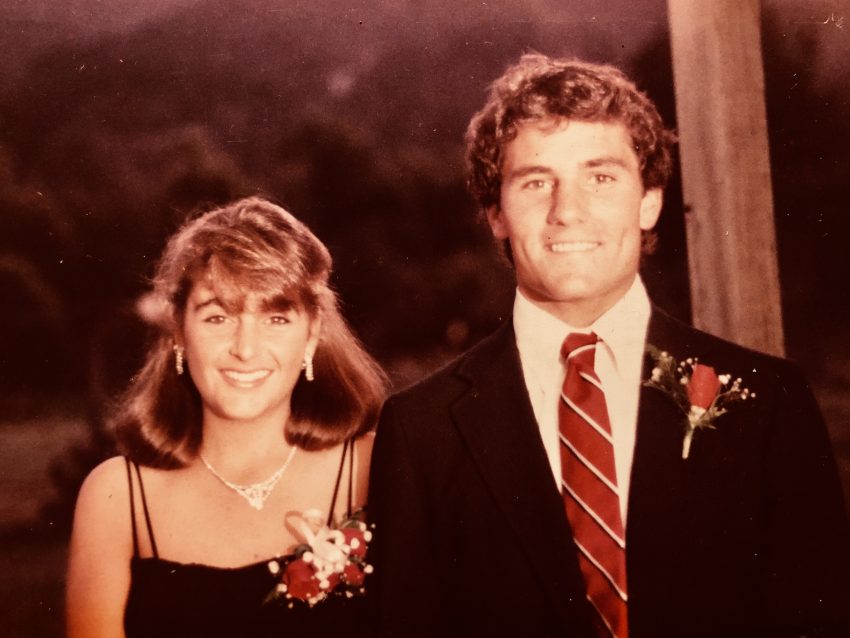 Many forget that high school is more than academics, athletics and extracurriculars. The hallways are more than paths between classes and the community offers more than just busy people leading busy lives. Carmel High School is where many kids discover passion, their future plans and love.

The love stories of a few Carmel High graduates began and continue within the community.

English teacher Norma Walch sat Aly directly in front of Jerry Kurz second semester of their senior year, circa 1987. Aly, giddy with schoolgirl excitement, noticed he was cute right away. During class, Aly would play with her hair designing intricate French braids to “avoid class time.” Jerry would notice but never comment, until one day when he whispered “wow” directly into her ear.

Jerry asked her to prom, and they spent the rest of their senior year as a couple, spending weekends and summer days at the Kurz family ranch in King City, never expecting it to be more than short-term high school fling. They went their separate ways, as Jerry attended Cal Poly and Aly went to Sierra City College.

Flash forward 10 years, and Aly and Jerry were both back in Carmel Valley.

It took some convincing from her friend, but Aly agreed to give the Kurz residence a call.

“I had three of my buddies sleeping on the floor as the answering machine came on, at probably one in the morning,” Jerry explainns. “I heard a girl’s voice, but didn’t recognize it until Aly’s voice came on. I picked it up and told her we should probably talk in the morning.”

Within two weeks, they went on their second first date, and it all fell back into place. Aly and Jerry got married in 2001 and had two children, Julia and Samantha, who currently attend CHS.

Craig and Mindy Cox met at Larson Field playing on the same Little League team. At that time, they were in elementary school.

After a year of separation, due to Craig’s fifth grade promotion, the two began what would be their first and only love as Mindy entered the sixth grade. The CMS hallways were home to the pair’s first glimpses of their future.

The Sadie Hawkins dance presented Mindy the opportunity to ask a boy. But Mindy didn’t choose Craig. Her best friend did. Thankfully, the girls “innocently switched dates” during the dance, according to Mindy.

Once in high school together, they dated off and on.

“Mindy was always dating the quarterback or the cool guy and I was never the coolest guy,” Craig says. “But every year of high school we reconnected at least once. I’ve thought she was the one my whole life.”

After high school, Mindy ended up in Santa Barbara, while Craig was living in Carmel. They kept in touch, but were never officially together.

“Suddenly, life got put into perspective in a big way,” Mindy says. “I moved home. We realized what was important.” They decided to live together, buy a house, get puppies and, finally, get married!

Craig and Mindy have two daughters, Quinci and Teagan, who currently attend CHS.

Chemistry from the Start

Lada moved from Los Angeles her freshman year. She was starting her sophomore year when she was walking down the science wing hallway with books in hand. Bret, a junior, stopped Lada to compliment her folder which was covered in popular ‘80s bands.

“The folder was just an excuse,” Bret explains. “At first glance, I thought she was amazing.”

Bret later asked her to the Homecoming dance.

“We were friends,” reflects Lada. “He would give me a ride home every day. We would hangout, laugh, go to the beach, meet up during lunch…but just as friends.”

Although they remained strictly friends throughout their first three years at CHS, there was always a spark. Lada remembers always having chemistry, but never acting on it until time began to run out in the second semester of Bret’s senior year. Their friendship shifted toward a relationship, but was put to a stop when Bret left for San Diego after graduation.

“We would write letters,” says Lada. “I still have those love letters.”

Lada and Bret got married and moved back to Carmel. They have two children, Cole and Bianca, who both attend CHS.

It was storm season. Mudslide marks that covered the Santa Lucia Mountains could be seen from Carmel Valley Road and the river was overflowing. Mike Kelly drove over to investigate.

That was in 1983. Prom was approaching, and Mike saw it as the perfect excuse to ask Nicole out. He mustered up the courage, but Nicole had previously committed to prom with another boy and asked for a rain check.

In shock that Mike had asked her on a date, Nicole went to have dinner at the Kelly residence.

“I was so excited after that night, literally jumping up and down. I couldn’t believe it,” recalls Nicole. “I was immediately in love. He was Mike Kelly and a jock and so cute.”

The pair dated their junior and senior years of high school, as well as through college, Mike at Berkeley and Nicole in Santa Barbara.

After college, they separated for almost 10 years, never thinking they would get back together.

The time they spent apart allowed them both to realize just how special being with someone from home really is.

“I think I knew all along,” says Mike. “I could never see myself with anyone else.”

Around 1998, Nicole and Mike met up again, went on a few dates, and the rest is history.

“It just felt right,” says Nicole. “He felt like home.”

The pair got married in 2000 and had three children, Nick, Keegan, and Peyton.