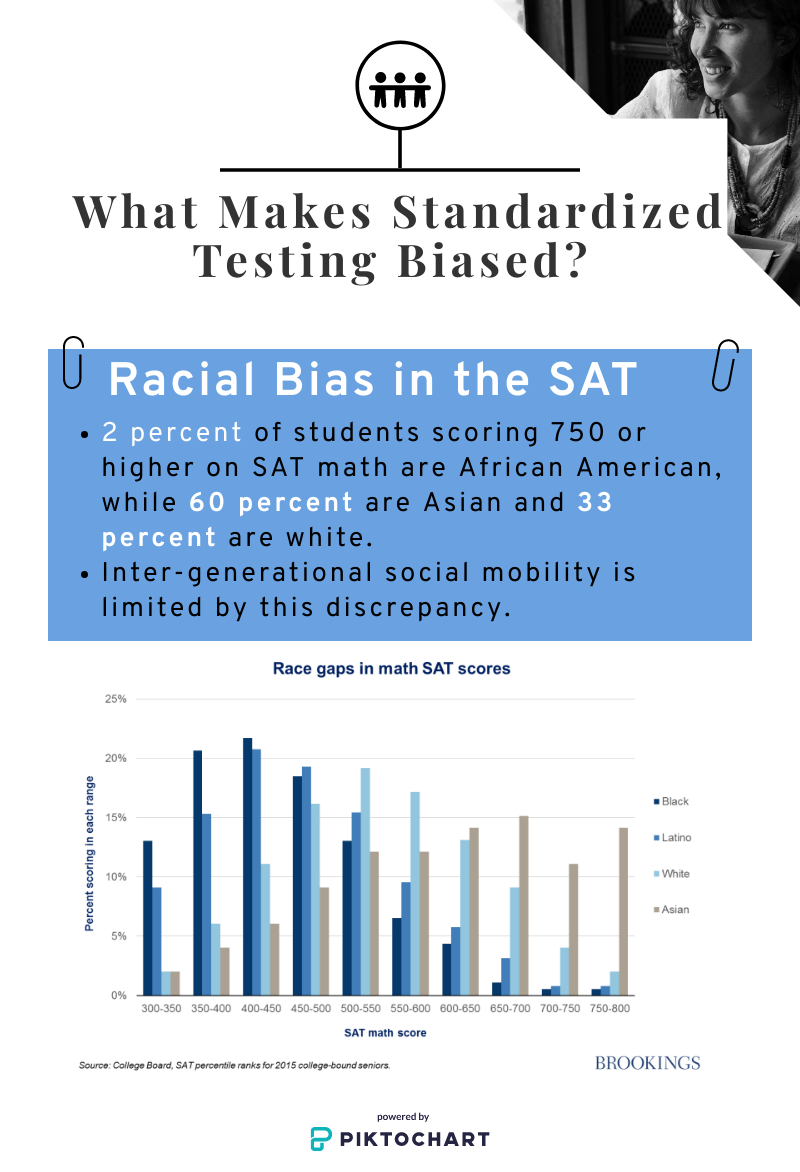 When the University of Chicago, one of the top 20 colleges in the U.S. according to USA Today, made the decision to go test-optional, allowing students to opt to send in their ACT and SAT scores at their own discretion, the decision was undoubtedly polarizing, but absolutely necessary: Far too much worth is placed on attempts to quantify a student’s academic merit when it comes to college applications.

Currently, out of the 3,026 four-year colleges in America, 900 are test-optional, according to Niche, a college-ranking website. These universities instead place a greater value on essays and personal insight questions.

Racial divide is one of the reasons why colleges have taken the test-optional route. Data reveals that the average SAT score in communities with higher black and Latino populations is lower than those in majority-white communities. According to data from the College Board, the mean score on the SAT math section was 428 for African Americans and 457 for Latinos, while for whites it was 534 and for Asians 598. Further, the 67th percentile score for black test takers was 1,000, while the 67th percentile for whites was 1,200.

Socioeconomic factors necessitate getting rid of standardized testing as a factor on applications. While oftentimes affluent white and Asian communities are able to afford SAT prep and tutoring, and are likewise able to make it a priority for their children to attend college, the same can’t be said for majority-black or -Latino communities, which are often still impacted by the lasting impacts of segregation.

For those who come from money and privilege, it’s easy to explain away this discrepancy: You should score higher if you just study more, right? But as Operation Varsity Blues—it resulted in the arrest of Felicity Huffman for paying a third-party to take the SAT for her child—shows, this isn’t always the case and that disproportionately distributed generational wealth has a major impact on scores and, thus, on college applications.

Even in less extreme circumstances, privilege and socioeconomic status are deeply ingrained in standardized testing because schools with the funding to provide services like the practice SAT and test tutoring have a steep advantage when it comes to the average score their students earn.

Aside from racial and financial bias, there’s no denying that gaming the system and becoming excellent at taking tests, without necessarily developing skills in math or English, may be more important than doing any real learning. In my own personal experience, the mound of ACT and SAT prep books I read, even those from the College Board themselves, all emphasized the importance of understanding the types of questions the tests ask, how quickly you’ll need to go on each section and the perfect algorithm for obtaining an ideal essay score.

Given the high stakes and immense pressure of obtaining one of the scores you’ll find when googling “average ACT for [insert school here],” it’s no surprise that the score becomes everything while learning takes a backseat. The school system forces our fixations on quantitative values for our intellect, and this peaks in the standardized testing environment. Colleges give awards in the form of acceptance letters to students who can master the art of the test, but how do these skills apply to the real-world careers that college allegedly prepares us for?

Furthermore, what value comes in learning to answer a barrage of questions quickly? The time-dependent standardized test, theoretically, is counterintuitive to the skills students are asked to develop, like critical and logical thinking, which may be squandered in the testing environment. No concrete evidence has been released by the College Board that the short testing time frame is necessary to a successful standardized test, outside of the length of the test itself.

So next time you find yourself feeling some consternation over the fact that you got a 34 on the ACT instead of a 35, find solace in the fact that these nonsensical quantitative measures are slowly trending out of existence in the college application process.