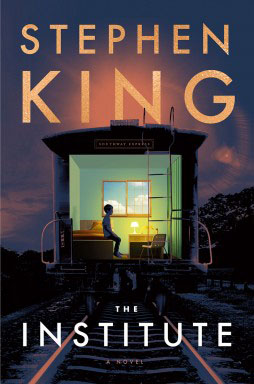 Stephen King’s newest thriller novel “The Institute” promises an intriguing and action-packed plot, but fails in execution and leaves readers unsatisfied by the end.

“The Institute” is about 12-year-old genius Luke Ellis, who is kidnapped from his home in Minneapolis, Minnesota, and sent to the sinister Institute. There, he meets overly mature kids who are gifted with supernatural abilities like him and the cruel Institute staff, who have no boundaries when it comes to getting what they want.

King’s writing style makes the book passable, as it gives the reader enough detail to give them a clear picture of what is going on while still leaving enough mystery to keep the reader engaged. King draws readers into the story and makes them feel as though they are in the Institute with Luke and his friends.

However, there is a flaw with the writing of the characters, specifically the children in the book. They do not feel like authentic kids and teens, but more like a bunch of stereotypes crammed into people that get dulled over time. As the story progresses, it feels as though King forgets that he is not writing adults. The dialogue goes from being over-the-top and animated to robotic and stiff. The few times King tries to make dialogue sound real, it feels like a desperate reach.

Another flaw comes in how King takes advantage of his platform and his audience and pushes his political beliefs and biases. Within the story, President Donald Trump is mentioned quite a few times by multiple characters, all of which assert the same opinions. King does not take the characters’ backgrounds or personalities into consideration when giving them these biases. Not only that, but it alienates a portion of King’s audience and pushes people away from the novel.

The portion of the audience that manages to get past the character flaws and uncomfortable political statements are left with a sub-par King book that can hardly compare to others in his collection. The plot seems to be following current trends, and though King adds his own twist, the book still feels less like a passion project and more like an attempt to keep himself relevant.

Fans of King don’t have to worry, as he has many future projects in the works. Over the past few years, King’s horror novels have been rapidly adapted into movies, TV shows and miniseries. Recent releases include “It: Chapter 2,” “Pet Sematary,” “Doctor Sleep,” “In the Tall Grass” and “Castle Rock” Season 2. Future releases include a new “The Stand” miniseries, “The Outsider” TV show on HBO and a new novella titled “If It Bleeds,” all set to come out in 2020.

Though King has promising movies and TV shows in the works, it does not overshadow “The Institute,” which can be given a generous 6/10 and hardly has a place among King’s other works.