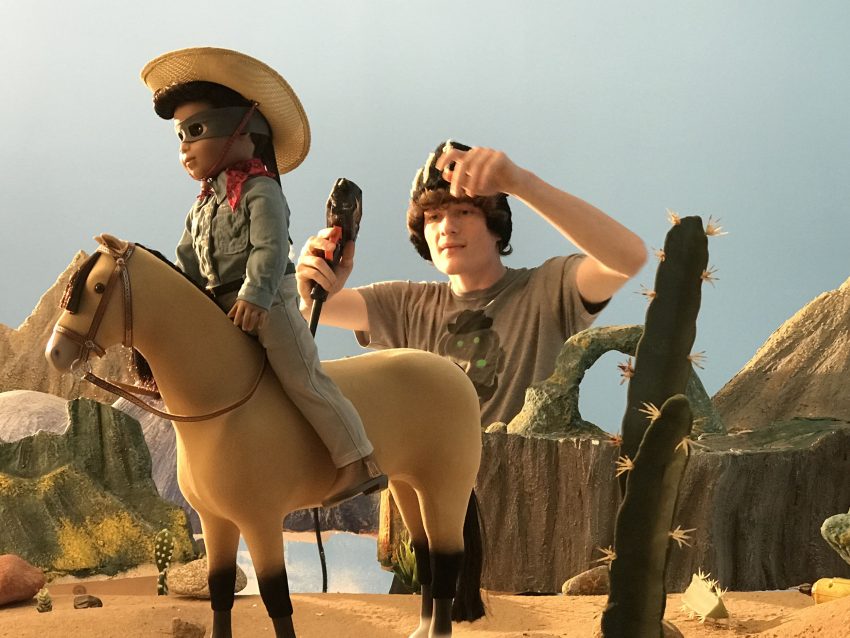 “Strange Reflections” is a five-minute stop-motion short describing the journey of Cressworth, a young knight fascinated with all sorts of artifacts and trinkets, and his attempts to rescue his friend Pyracrab, a three-legged mystic creature, from an ominous magic mirror Cressworth brings home one day.

The mastermind behind this project is Hans Voegeli, a 21-year-old CHS alumnusand senior at Woodbury University in Southern California, who developed these characters throughout his years in school, doodling Cressworth and Pyracrab on his homework and worksheets. Eventually, he realized that these two characters could work well together and be brought to life.

“I’ve been searching for the chance to bring them into the world and share these characters outside of comics,” says Voegeli, who has finally found the right time to introduce Cressworth and Pyracrab.

Although the final product will be rewarding, the filmmaker says that it is actually a tedious process, for every second consists of 12 frames in which armatures and wires have to be moved, so this five-minute video could consist of 3,600 frames, and since he’s only able to complete five seconds worth of footage in an hour, this senior thesis will be a time-consuming project.

Because of this, “Strange Reflections” is planned to be released May 20 to YouTube, with physical copies of the film to be released subsequently. Stop motion is a long and expensive endeavor, so Voegeli is raising money for his film, and he’s already passed his $750 goal. To support him, viewers can visit IndieGogo.com and search “Strange Reflections” in order to make a contribution.

Of course, this won’t be Hans Voegeli’s first film on YouTube, as he’s posted over 125 videos on his account “Little Brick Productions” since his junior year of high school. Having won the High School Category Award (grades 9-12) in the Engineering for You 2 Video Contest and the $5,000 prize given by the National Academy of Engineering, the animator’s winning film “Making Solar Panels More Affordable” is on YouTube too.

Voegeli’s obsession with stop motion traces all the way back to when he made his first video his sophomore year at CHS for Olga Chandler’s AP Spanish class. The project described 10 chores he did, but what separated his presentation from everyone else’s was his use of Lego figures performing the actions. Inspired by this event, Voegeli took Video Production the following year and Video Production II his senior year, fixated on pursuing his passion.

“For me, stop motion is about as close to magic as you can get because you’re taking a small, inanimate object—Legos, a puppet, something that is obviously not alive—and through the magic of stop motion you make it come alive,” the filmmaker explains. “You can give it a personality, you can do more than that, you can make people care about this little thing that isn’t actually alive, but you’re giving it that personality, and I just think it’s so amazing to be able to do that.”

“He knew right from high school when he started making his first Lego videos that that was something he wanted to do,” adds Brian Granbery, who taught Voegeli in both Video Production classes and AP Environmental Science.

After college, Voegeli hopes to become a motion animator, but he would be content with helping out the industry in any way he can, such as working in the art department to make props or prepping the scenes for the animation.

For this college senior, it’s really about doing what he loves.