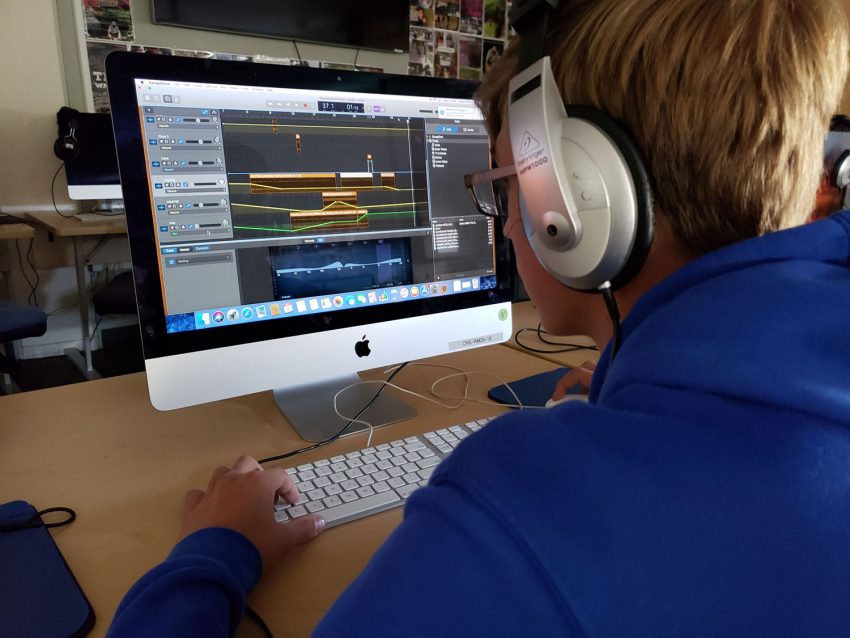 A course taken by musicians and non-musicians alike, students are taught the fundamentals of creating and producing music electronically in Digital Music, a program which has recently grown in popularity.

The focus of the class is working with GarageBand, a program with which students write, arrange and master their own original compositions. The course is not meant as a total replacement to traditional music performance classes, but instead serves to teach students a new set of skills in a digital audio workspace.

Since no prerequisite skills are necessary to take the class, students with no musical experience may take the course.

“It offers the ability for more students on campus to take a musically-oriented course that doesn’t require them to be in a performance ensemble,” Handley explains.

Many musicians take the class to fulfill their tech graduation requirements, but by the end of the course they often feel they got a lot more out of the class than they initially expected.

“I use a lot of the music theory I learned to compose my own new songs,” says senior Sophia Linnevers, an orchestra and choir student. Though she initially took the class in part to fulfill her tech requirement, Linnevers learned new skills through the program and had fun in the process.

Other students take the class as an introduction to music.

“I thought this was a good way to learn basic music theory,” says junior MJ Apfel, who had never taken a music class before Digital Music. “It’s one of my favorite classes I’ve taken at CHS.”

Handley emphasizes the versatile applications of the class which is shown through students’ collaborations with other programs on campus throughout the year, including Dance, Video Production and Graphic Design.

“I’m anxious to see that grow,” Handley comments about the collaborations. “I’d also like to see it expand in the realm of kids from Digital Music getting a little bit more experience and interest in running live sound on campus.”

Even if few students ever pursue electronic music-making outside the course, students learn skills in arranging, producing, and composing songs through the course that they incorporate into their skillset.

“It pushed me far enough out of my comfort zone to realize that I could take on other musical roles besides that of a performer,” says Sophia Buraglio, a CHS graduate pursuing music education at UCLA. The class gave her an entry point for arranging and composing music, a skill she continues to use.

The number of students taking the class rose dramatically this year, requiring a second section for the class, which has occurred only once before.

“How it snowballed this year, from 30 kids signing up to 60 kids, I have no idea,” says the teacher, whose best guess is simple word of mouth.

The additional section has not impacted the content of the class, but it has created a larger workload for Handley: “It has been kinda rough. I’m a lot more tired at the end of the day, I have a whole lot less time to get things done.” He adds that grading a larger number of projects is the greatest contributor to that time loss.

If the class continues to grow, then additional sections and a second teacher may be necessary.

Whatever the future is, the class serves as an opportunity for students with any level of musical experience to learn new skills in a unique environment.