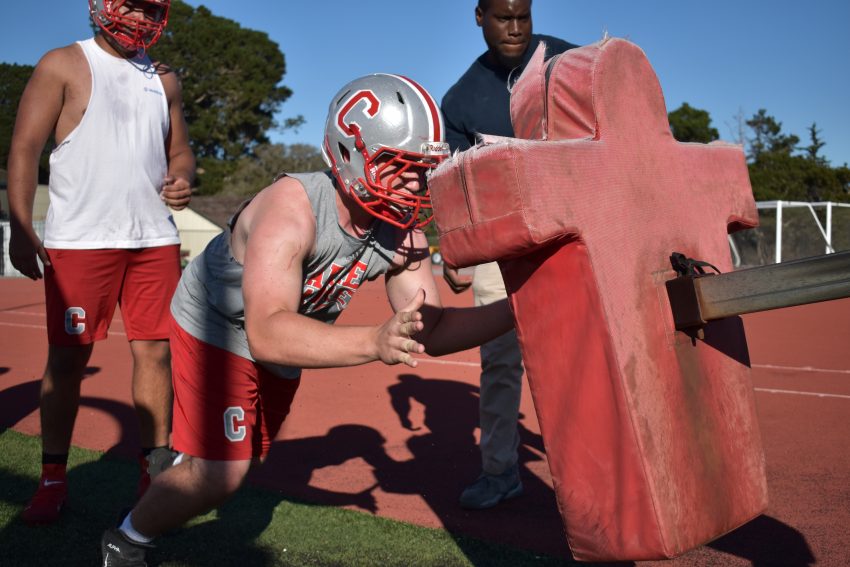 In 2009, the Carmel High varsity football team had 47 players—today, the team has 32members. Although a loss of players from one season to the next is not uncommon, the number of participants has decreased exponentially in the past decade and the number of new players has been unable to account for the loss.

Fans and players have expressed concern for next year’s varsity football team because 11 of the players on the varsity team are seniors, but varsity football coach Golden Anderson believes that rebuilding a team is part of the process.

“It’s always hard losing your seniors because they’re your most experienced players, and as a result, they end up being the huge contributors to the team,” athletic director Anderson says.

Coaches and players attribute the decline in participation in part to an increased awareness about head injuries.

“Head injuries were not as big of a deal, but my parents still had a ton of reservations about me playing football, my dad specifically,” explains CHS alum Devin Pearson, who was a two-time Mission Trail Athletic League Offensive Player of the Year and is now the assistant director of amateur scouting for the Boston Red Sox. “He played professional football and he had seen the physicality and for a long time he didn’t want me to play. Every parent knows how violent the sport is and has concerns for their kid.”

Today, football-induced concussions have led families to question if they are putting their child at risk by allowing them to play.

“My mom was hesitant to let me play this year due to the fear of head trauma,” says freshman Sawyer Hamilton, a free safety and wide receiver for the JV football team. “But all the pads and all the coaches emphasize safety.”

Other players have overlooked these concerns.

“Football is dangerous, but driving your car is dangerous too,” says senior Dakota Mornhinweg, a running back and free safety for the varsity football team. “Everything can be dangerous.”

In lightof parents’ concerns, CHS has made their concussion protocol more rigorous.

Sports Medicine teacher Matt Borek describes the protocol as a thorough five-step process that athletes showing symptoms of a concussion must go through; it takes eight days to complete and consists of a gradual integration back into their sport with 24-hour breaks.

In addition to increased medical precautions, the CHS football program has decreased the amount of tackling during practice in order to lower the chance of injuries.

“The only tackling we do in practice are on giant rolling rings, and we lift weights three days a week to be physically strong,” Anderson says.

Some parents have decided that despite the risks of injury, they are confident that football is safe.

“My mom said I’d be playing with kids just like myself,” explains starting varsity quarterback senior Kai Lee when discussing whether his parents had reservations about initially letting him play football. Lee, who was unable to play in his last homecoming game this season because of a concussion from a game against Salinas High School, adds, “It’s not like there’s any pros out there.”

Despite attempts to make the sport safer, high school football’s participation is experiencing a major national decline. In the 2018-2019 school year, football participation had reached a record low with a little over a million players, reports the National Federation of High School Sports. Between 2008 and 2019, there has been 106,290 fewer participants.

This year, the varsity football team is set to play in their first playoff game Nov. 15 at Monterey Peninsula College against Saratoga at 7 p.m., but with about one-third of the varsity team graduating and fewer students showing interest in playing, fans, coaches and students can only hope that the program will survive.

For now, the future of CHS football appears to be uncertain.