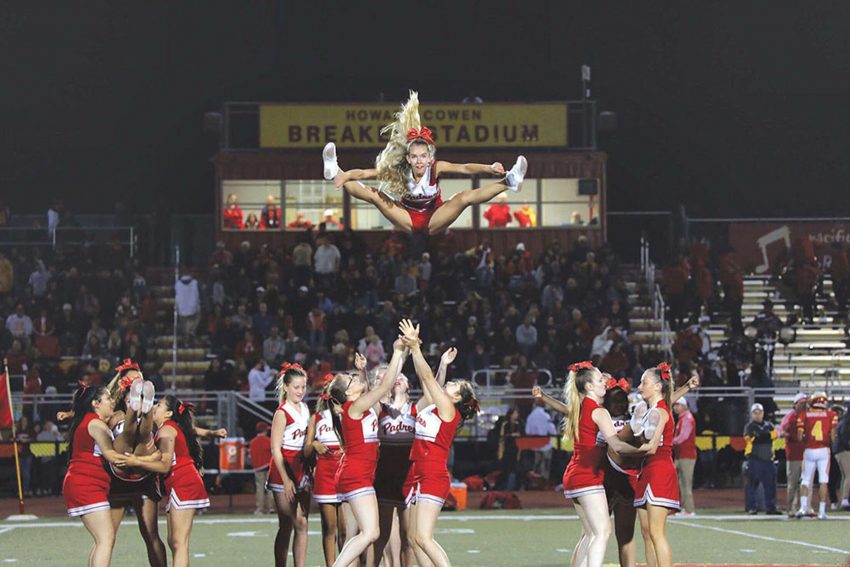 After years of being on the sidelines, the CHS cheer team is eager for one thing: qualification as an official school sport. Though the driving force to become an official sport was initially for more funding, the coach and team captain believe the new designation also has the potential to gain them more recognition on campus.

Currently qualified as a club sport, the cheer team doesn’t get the typical perks of being on a school-sanctioned team, such as freshmen having the option to take a study hall and waive their P.E. class. Still, the team’s members must adhere to all the requirements like other sports, such as obtaining a $40 ASB stamp, completing physicals before playing and keeping their grade point averages above 2.0.

This school year, multiple girls on the cheer team have suffered injuries, but not at games or practices. They have gotten hurt in freshman P.E., which then took them out of their sport. Teresa Cervantes recently experienced a concussion, while May Drummond was out for weeks due to a broken tailbone.

Though the team wants qualifications for many reasons, cheer coach Sarah Collins explains that funding is the main issue. She explains that cheer is a much more expensive sport than most presume, and even the uniform—a skirt and top—costs more than what the school provides. Each team member must purchase her own undershorts, undershirt, shoes, warmup pants and jacket. The price can range anywhere from $500 to $600, according to Head.

“We have to do all of our own fundraising, which is fine,” Collins explains. “But due to the high cost of cheer, it is very hard to fundraise the amount needed to cover everything plus with all the commitment and time in [the actual sport].”

The team also attends a cheer camp over the summer, where cheerleaders condition on campus for three days and then travel to Palm Springs for bonding and more workouts. Collins estimates that the trip costs approximately $500 for each cheerleader, which leads to a total of over $1,000 to cheer each year.

But cheer is not the only activity where players must use their own money for individual equipment or clothing.

CHS athletic director Golden Anderson uses softball as an example, where players have to buy their own batting gloves, bats, gloves and often cleats themselves. Meanwhile, general equipment is paid for by the school, so batting cages, nets and balls are provided.

“Each team has a per-sport budget, which is designed by their coaches and myself,” Anderson explains. “It is mostly based on their needs, so it fluctuates. You also can’t really have the same budget for different sports because equipment is different.”

Anderson explains that CHS renews all team uniforms in a four-year cycle, but that only covers the skirt and top for cheerleaders. Collins notes that there is also a need of new team equipment, like practice mats, to ensure safety.

With a squad of about a dozen, the cheer team practices nearly year-round. Beginning with conditioning in April, they cheer for the football and basketball teams with their season winding down in January.

Head notes that Collins pours most of the money she makes as a coach back into the team. But unlike varsity head coaches, Collins doesn’t make $4,000 to $6,000 per a three-to-four month season. Collins is qualified as a “cheer advisor,” therefore making roughly $8,800 in 2017 for coaching about nine months out of the year, according to Transparent California, a public pay and pension database.

“If they are qualified as a sport, they will be able to get more training and have more opportunities,” the coach explains. “Cheer is one of the more dangerous sports, and they should have a more professional coach.”

Coach Collins is not permitted to teach tumbling or other stunts, so to learn those skills a certified trainer would need to be hired for the team. At this time, the team doesn’t have enough money for such an expenditure, the coach explains.

The discussion for qualification as a sport is nothing new to the district. Roughly two years ago, Anderson and directors from other schools on the peninsula debated adding cheer to the list of official sports teams after competitive cheer was cleared by the California Interscholastic Federation. However, there did not seem to be much interest among the girls at CHS, as well as among other local school districts.

“We are open to it, if kids are wanting to do it,” Anderson says. “We would be happy to explore that with them. We aren’t playing keep-away.”

The team’s next goal is to attend a CUSD board meeting with a detailed plan and proposal for recognition as an official school sport.