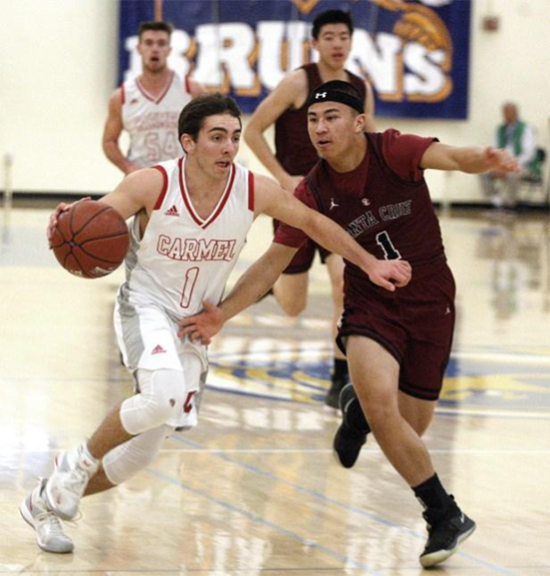 After a switch to a competitive Gabilan division in the newly formed Pacific Coast Athletic League for the 2018-19 season, Carmel boys’ basketball finished with a dominant 23-5 record. This winter, new leaders rise and all-star seniors return for the defending league and Division IV Central Coast Section champions.

“Our starting lineup is going to be high-octane for sure,” says senior Max Carr, a four-year member of the program. “[Coach Kurt] Grahl has us run a fast-paced offense and a full-court press that makes the other team gassed while we have our foot on the gas.”

The group is composed of team-first, high-energy talents with a tight bond and a flare for strong, quick offense, leading the league in not just scoring, but field goals, rebounds, assists, steals and a handful of other categories on the stat sheet.

“Every year we’re really trying to give our guys opportunities to develop their game and step into leadership roles, and we do a lot of preparation outside of the season,” comments head coach Kurt Grahl, who joined the Carmel Basketball program as a coach four years ago, and in his past two years has boasted a strong 42-12 record. “Although we’ve lost some valuable players, we’ve got some guys that have stepped up their leadership and stepped up their game.”

Core offensive force comes from junior shooting guard JT Byrne, who follows team captain Kai Lee in scoring and served as a double-double machine last year, averaging 10 rebounds and 19.30 points per game. Byrne won all mission trail athletic league MVP his freshman year and went on to win the Gabilan division scoring title by a landslide the next year. The team is ledby senior point guard Lee and Ethan Fletcher, who have received praise from coaches and teammates for their ability to greatly improve their skills since last season.

“Kai Lee has tremendously improved as a player, and there were games this summer where it felt like watching a college player play against the kids,” comments Grahl, Lee’s coach since his freshman year.

Despite retaining all-star-level players, thisteam has undoubtedly faced changes after joining the Gabilan division, the most competitive division in the Pacific Coast Athletic League. When CHS made the switch to the Gabilan division last year, the team was prepared with senior veterans in all-stars Joe Garello and Zach DeZee. They joined a dominant Monterey team and the previous league champs in Alisal, who just recently lost their near four-year home winning streak. The Padres came out on top of the standings, losing only one in-league game versus Monterey High.

“This year the ceiling for the team is as high as we set it,” comments senior Garrett Griffin, another four-year member. “We have the talent to make it as far as we want to, and it all comes down to working hard every day and bringing it to every practice.”

Students can watch CHS tip off their season in hopes to win another Central Coast Section division title Nov. 26 at 7 p.m. against North Monterey County at home.