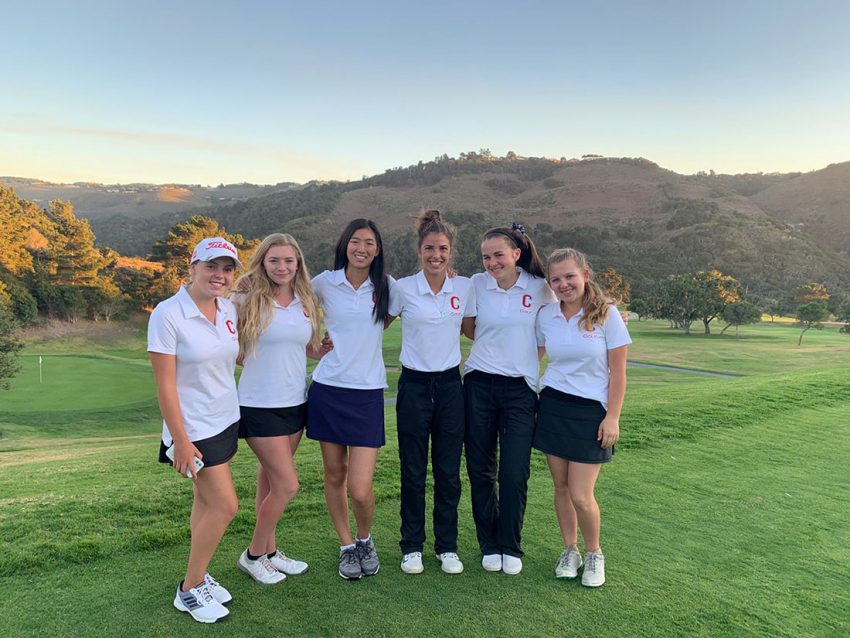 The Carmel girls’ golf team had a strong run this year, performing similarly to their 2018-2019 season and finishing 10-2, losing only to Robert Louis Stevenson School.

“It was exciting to see all of the team players improve throughout the course of the season,” coach Ross Kroeker says.

Senior Brenna Ozel was a medalist after shooting the lowest score at the competition, 73. This score resulted in her becoming the PCAL Player of the Year, which she is ecstatic about.

“It feels good!” Ozel says. “I’m glad all of my hard work has paid off, and I’ve had awesome coaches and teammates to support me.”

Ozel led the team this year with the fewest strokes in most 9-hole games, shooting mid to high 30s to mid 40s. Bohlman closely followed with all of her scores being in the low to mid 40s.

Five players went to CCS this year, including Ozel, Southard, Ikemiya, Tarsitano, and Smith. The competition at CCS was much more intense than in years past with 17 teams competing compared to the previous year having 13 competing high schools.

Similarly to the previous year’s CCS, in which Hickam tied for 22nd, the team did well at the individual level. Ozel overall did the best, tying with eight players out of 116 from across the central coast for 33rd place.

Their season was hard work, but the team persevered. Although they didn’t perform as well as they did last year at CCS, they made up for it by doing well throughout the whole season and at the PCAL.

Graduating in June, Ozel says she had many fond and memorable moments from the past four years, as well as several great matches this year.

“We all played really well and beat [Santa Catalina] by a good amount,” Ozel reminisces. “Elle and I also had one of our low rounds there. I shot one over and Elle shot six over.”

Nongraduating players, such as sophomore Bohlman, are also looking forward to the next season and improving their skills and overall game.

“I’m looking forward to improve individually and as a team in our scores,” Bohlman says. “I am trying to add more distance to my game and to focus a lot more on my putting.”

Kroeker as well is already looking to the future for the next season to look for ways that the team can improve.

“We will have 12 or 13 players return next fall and they will have all gained another year of development. I expect the team to be strong for the foreseeable future.”