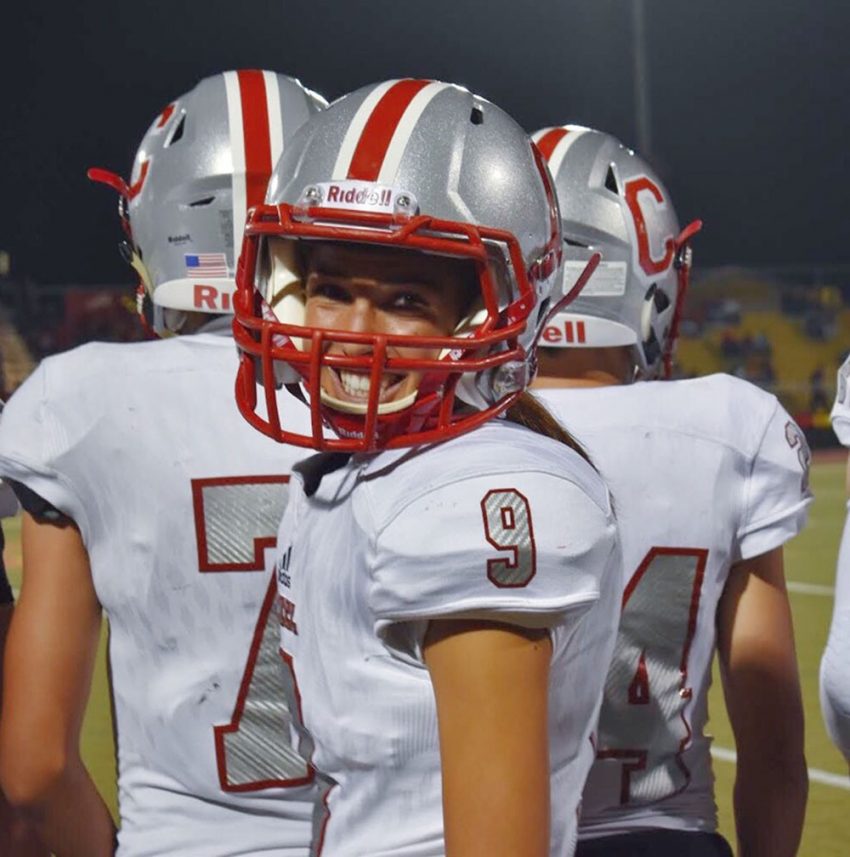 High school sophomore Elle Bohlman now walks on to the Carmel High field, not only as a three-sport athlete playing lacrosse, basketball and golf, but now—equipped with shoulder pads, eye black and a gleaming helmet—she struts across the field as the only female member of the football team.

“I’ve always wanted to play football since I was little,” Bohlman says. “It’s just so exciting. I finally get to do it.”

This passion, she reveals, is not only fueled by athletic ability, but by the support of her father.

“Since I was little, my dad was trying to teach me sports,” she explains, “but I think I was just kind of born to play them.”

Bohlman is a kicker for the football team, meaning that after the team scores a touchdown, she goes in to score a point—something called a PAT—by kicking the ball from a distance of about 20 yards, through the uprights. When the four-sport athlete isn’t kicking, she practices as a wide receiver, and when she’s not at practice, she goes to the field on weekends to practice kicking.

“When she sets her mind to something, she’ll get it done,” says Addie Crabbe, a close friend of the athlete. “She works really hard outside of school putting in hours at her basketball court, playing catch with her little siblings or going to the high school every weekend to kick.”

But the female athlete still has to overcome the inherent stigma that comes with partaking in this typically male-dominated sport.

“My first day I was so nervous,” she says. “I mean, it’s scary being the only girl and trying this.”

While Bohlman brings a different dynamic to the team, “it’s pretty natural,” says boyfriend and teammate JT Byrne. “It’s different, obviously. I’ve never dated anybody on the football team, but it’s pretty normal. It just feels like she is a part of the team.”

When asked about the double standard, the Bohlman replies, “They treat me the same. I don’t want them to treat me softer or different. The coaches are hard on me too, and I like the intensity.”

Bohlman also acknowledges the risk of harm that comes with a contact sport.

“I’m pretty tough I think,” she says. “I also don’t think Anderson would put me in the position to fail or get hurt. He knows me. The team knows me.”

The four-sport athlete made an appearance in the annual Shoe Game where she was given instructions to run a route that she normally just runs in practice.

“That was not supposed to happen,” she says, “but I could hear my family and my friends cheering for me in the stands. It was crazy.”

Afterward, everyone had taken off their helmets, and Bohlman accompanied the team in the post-game ritual of shaking hands.

“They were all like, ‘What? That’s a girl?’ I could see it in their faces, which is one of my favorite parts.”