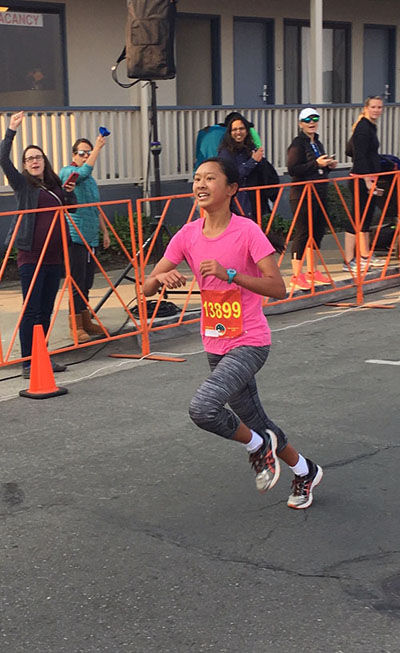 Fourteen-year-old freshman Ryleigh Teague is known for her adroit running, and with a personal record of a 5 minute, 26 second mile, Teague is thriving on Carmel High School’s cross-country team.

In 2018, Teague participated in the Big Sur 5K as a seventh grader. Not only was she able to win in her division, but she got first for all women.

“I was the youngest female to ever win the Big Sur 5K,” says Teague.

Her family was proud of her, and her win also made it into the county newspaper.

Teague says she started to get into running in middle school during sixth grade. In seventh grade, she was able to break the girls’ mile record, and in eighth grade Teague and her relay team also broke the middle school’s 4×100-meter record and the 4×400-meter record.

She has been participating on a cross-county team for three years now, going on four. Teague’s mentality while running is to think of a fast-tempo song and set a rhythm for her steps. This allows her to keep a fast and constant pace while running.

She enjoys running because it gives her time to herself and is peaceful. But Teague does not enjoy sprints as much because she gets tired. Teague adds that when she runs, she has a goal to not rest because the more she stops, the more tired she gets.

“Ryleigh loves the sportsmanship of being on a team and competing for the Carmel Padres,” says Teague’s mom, Stacey.

“Ryleigh is an all-around athlete,” says her cross-country coach Whit Rambach. “Her work ethic, raw talent and pursuit of excellence fuels her teammates to be their best.”

Not only that, but Rambach says that Teague is the whole package and he can’t wait to “watch [her talent] unfold.”

One of her many goals this year in cross-country is to break 19 minutes on the three-mile run. This would be an average time of six-and-a-half minutes per mile.

Most of the time, Teague runs with her team. During practice she runs three miles, and outside of practice, she participates in 5K and 10K runs. But since her cross-country practices are every day of the week, weekends are often rest days for her.

The most she has run at one time was at the end of this past summer, when she ran seven miles at Jacks Peak. She only stopped a couple times to rest and catch her breath.

Ryleigh Teague is also an active student on campus. When she isn’t running or doing cross-country, she also participates in the Robotics Club and mock trial whenever possible. Therefore, most days she is busy with after-school activities.