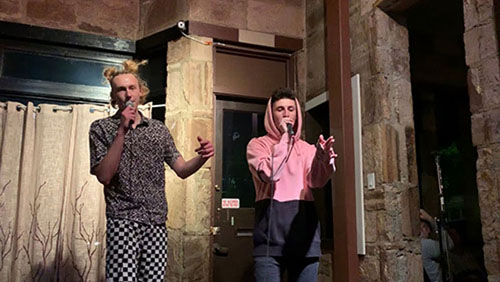 Rather than being consumed by the emotional rollercoaster that is senior year, Josiah Sullivan and Blue West have put their energy into their passion for music by starting their rap duo RIVERA.BLUE.

“Music has always been a huge part of my life,” West says. “Since I was young, I have used it as a way to express my inner self.”

The pair boasts an assortment of sounds from their notoriously bombastic beats found in “Blood On My Body” to slower, more delicate tracks such as “What Keeps Us Stable.” No matter the tempo or mood, all of the pieces characteristically feature the cadence of West’s popping, smoky verses intertwining entrancingly with Sullivan’s smooth, melodic voice.

After combining their shared enthusiasm to create RIVERA.BLUE, the twosome have published five tracks on the platform SoundCloud.

“It all started with ‘Alone Tonight,’” Sullivan recounts. “It was our first song together, and it really put us on the map and cemented us as new performers.”

Since the song’s production in April, the track has gathered over 2,000 plays, in addition to lending the pair opportunities to perform live.

Fellow senior Laura Mastrocola was there from the very beginning.

“I saw their first open mic at East Village, and it’s been awesome to see them develop both emotionally and musically,” Mastrocola says.

With both West and Sullivan sharing a background in digital music, their car-shaking, head-bopping beats are handcrafted, with catchy vocals that have permeated the culture of the senior class.

“Our biggest supporters have been in our grade,” Sullivan remarks. “I walk around campus and people will play our beats or shout lyrics.”

“It’s pretty cool to see them follow their dreams and actually make something,” CHS senior Svenn Eyjolfsson says. “I listen to their songs all the time, and I feel really inspired by them.”

Aside from the addictive melodies and pulses of their songs, it’s not surprising that their music caught on, with their charming and bubbly personalities alone being a reason for their success. Standing tall at 6 feet, 4 inches, Sullivan’s infectious laugh booms through the hallways with the same regularity and intensity of the school bell while West’s vibrant commentary lights up any room.

And as always, the pair has faced setbacks.

“It has been hard to align our schedules recently,” Sullivan says. “We both have jobs and are taking MPC classes, but are still trying to make time for the music.”

Both are involved in after-school activities, with Josiah being an integral part of the boys’ volleyball team, and Blue an avid surfer.

And while high school will soon end for the duo, the legacy of RIVERA.BLUE will live on.

Sullivan says, “We’re working on releasing a full album by the end of the year, and we’re also about to start selling merch.”