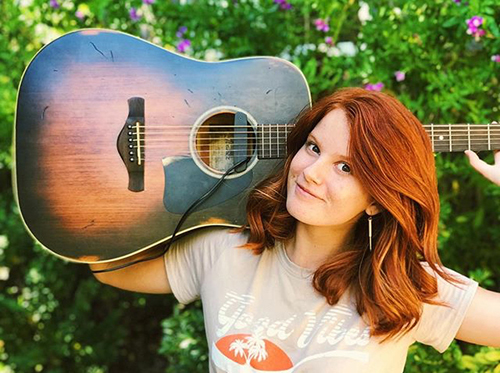 CHS senior Izzy DeVor distinctly remembers the first time her face was used in promotional materials for one of her shows.

“I walked in and saw a bunch of posters with my face,” describes DeVor, who found them reassuring rather than intimidating. “I’m nothing compared to so many other musicians, but it was very cool and motivational.”

Influenced by folk singers like Bob Dylan and Joni Mitchell, DeVor writes and performs music around Monterey County, often in solo shows. She is part of the Singer-Songwriters’ Club and maintains a substantial presence online with a personal website and several social media pages.

Coming from a family of musicians, DeVor began playing piano when she was 4. She quickly shied away from classical training, and by age 6, she decided to write her own music rather than learn to play others’.

“Performing is what I’m supposed to do,” saysDeVor, describing it as her biggest passion in life and something that she hopes to pursue as a career. “I want to play music for as many people as I can.”

DeVor says that performing onstage does not scare her, something she attributes to an extroverted personality as a child.

Her comfort onstage is obvious.

DeVor has performed her music for the last few years, often in intimate settings like lounges and coffee shops. She also posts her songs to Instagram and her website.

“I use music as an outlet for my feelings,” says the musician, who believes that anything can be an inspiration, whether it be a personal relationship or everyday things like the way someone walks.

The subjects she tackles contribute to her appeal onstage.

“She’s got a stage presence that is very authentic and real,” says Marc Stafford, teacher sponsor of Singer-Songwriters’ Club, adding that “she is who she is, whether she’s offstage or onstage.”

One of her current goals is to expand her musical horizons.

“I’m comfortable with what I write, but I want to go beyond what I know,” explains DeVor, who believes Singers-Songwriters’ club, as well as classes like Digital Music and Jazz Workshop, are opportunities for growth. DeVor intends to take a gap year after graduation to travel the country and expose herself to diverse musical styles.

As for the posters, they were not the only memorable part of that night. She recalls fondly the warm reception of the crowd after the two-hour concert.

“It’s encouraging to see that I’m making some sort of progress,” she says.

Izzy DeVor plans to release a new single on Spotify by the end of the year.