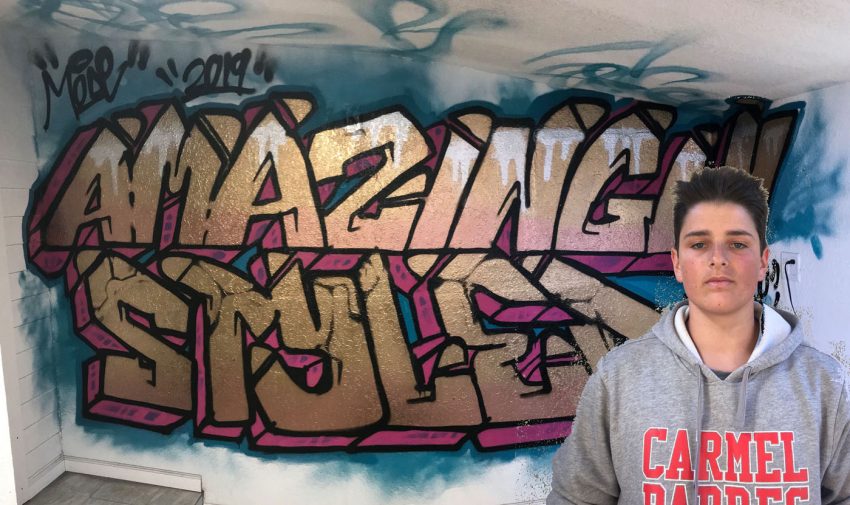 Freshman Jules Forrest was 11 years old when he picked up his first can of spray paint. What began as a pastime at a summer camp four years ago has quickly become the start of a promising career as a professional graffiti artist.

Serifs. Compressed extensions. Bars. These letter fundamentals help artists distinguish their art by giving it a unique structure, and Forrest says that this design flexibility is his favorite aspect of street art.

“The letters are all built from bars that you distort and change,” he explains. “You can add or subtract them, just for style.”

Forrest’s father Blake describes how the hidden world of graffiti can be difficult to understand from an outside perspective: “It’s a kind of language that these graffiti artists have amongst themselves.”

The 15-year-old is fluent in this language after countless hours spent researching and bettering his techniques, mastering the art form so well that businesses now hire him. He has worked for companies including the Los Angeles Compton Cowboys—he flies to L.A. every few months to do pieces for them—and a hair salon that hired him to do a 15-letter commission, a project he describes as especially difficult because of its exceptional length.

In the future, though, Forrest dreams of making a living with street art and following the careers of previous successful graffiti artists, and his family is highly supportive of his passion.

“His work is very professional, and it doesn’t look like a 15-year-old did it,” his sister Izzy notes. “It’s also a good outlet for him to just reset. If he has a stressful day he always turns to art.”

Blake recognized that his son had a natural talent for graffiti when he became good at it surprisingly fast, and while some aspects of Jules’ craft worry him as a parent, he views it in a positive light overall.

“I would tell him to go for it,” he says about encouraging his son to pursue the profession. “It’s a valid art style, and there are a lot of people who are doing very well with it.”

The CHS freshman has learned to navigate the different customs surrounding graffiti in the cities he has lived, adjusting to Carmel’s lack of graffiti culture compared to his previous neighborhood in Berkeley.

Wherever he ends up after high school, though, Jules Forrest plans to continue practicing street art and honing his skills. It is clear that a promising career path lies in store for the young entrepreneur.