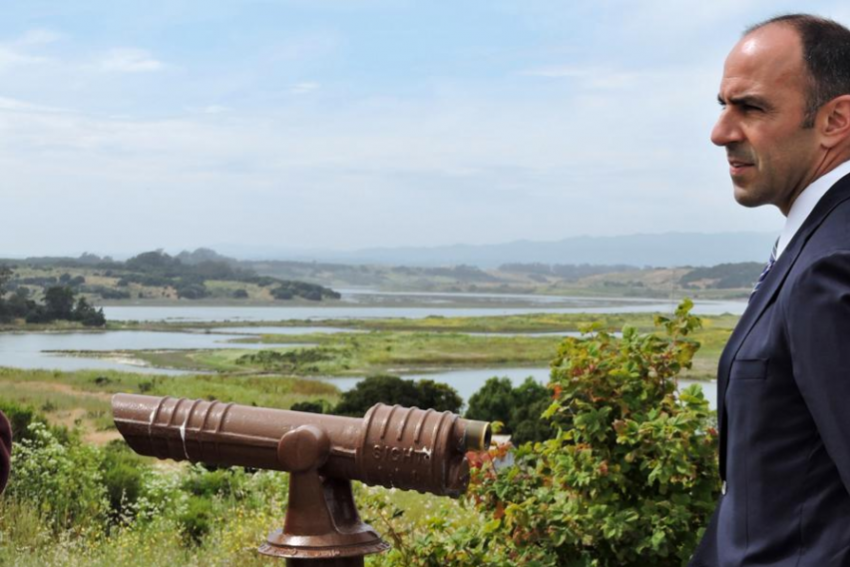 Rep. Jimmy Panetta speaks on the role of California in national environmental protocol, legislation and the future

Sitting in a patio chair overlooking the lush Carmel Valley, Congressman Jimmy Panetta smiles, admiring the environment he grew up in. The valley is green and forested, Garland Ranch Regional Park sprawled across the hill opposite.

Panetta describes this as “the most beautiful district in the nation,” a diverse area with a population of citizens passionate about its protection. Not only is Monterey County an environmentally conscious region, but California as a whole has been one of the leaders in environmental protection and policy for decades.

“We’re lucky that we have certain protections in place such as the Monterey Bay Marine Sanctuary, Pinnacles National Park, a number of state and local parks including the one I grew up going to: Garland National Park,” says Panetta.

According to the congressman, California’s environmental policy reflects the opinions and desires of the state’s residents, who are reliably vocal about the importance of protecting California’s diverse environment. Because California has established itself as a leader in environmental protection following the passage of numerous environmental bills such as Assembly Bill 32, which involves the reduction of greenhouse gasses in California, Panetta says that the most important thing at this point is to ensure those protections are enforced and not rolled back.

“We’re ahead of the curve, but we have to continue being that leader when it comes to our environment,” Panetta explains.

Using a quote he heard from his CHS wrestling coach to illustrate the issues the state and nation are currently facing in terms of environmental policy, he says, “Once you make your mark in this world, watch out for those with the erasers.”

Regarding environmental policy in the U.S., the “erasers” are the current administration, which has shown a lack of support for progressive climate change and environmental action, despite the evidence that depicts the severity of the environmental issues facing the world today.

“We’re doing everything we can to push back on this administration that has put forward three executive orders wanting to open up certain sanctuaries, monuments and our outer-continental shell to offshore oil drilling,” Panetta says of the ways in which he has been fighting to keep his district protected.

Not only are areas of Monterey Country threatened, but in June 2017, President Trump announced his intent to withdraw the U.S. from the Paris Climate Accords, the agreement which stipulates that each country involved will take action in order to keep the climate from warming above two degrees Celsius from pre-industrial levels.

According to Panetta, during a time when environmental legislation is being rolled back across the country, it is even more important that California continue to be a leader in progressive policy and that the state is strong in its fight to protect the diverse environments that the citizens love.

Much of what is being done in the state involves not only the protection and restoration of natural areas, but investment into sustainable energy in order to move the state away from fossil fuels, a goal which came from the passage of Assembly Bill 32 in 2006, which set the goal of reducing California’s greenhouse gas emissions to 1990 levels by 2020.

“We have to make sure that we continue to make those types of investments in renewables on our own so that we can take affirmative steps to reduce our carbon output,” Panetta says.

One method of reducing carbon output in an economy is the implementation of a carbon fee, which has been passed in a number of states in the U.S., as well as in Canada. While the dividends from a carbon tax typically return to communities, the congressman asserts that the revenue from the tax needs to go back into environmental science: “The dividends [from a carbon tax] need to go back into research and development…. That’s the only way we’re going to get ahead of the curve.”

A carbon tax is only one of a number of strategies for mitigating the impacts of climate change, and while a fee could pass in progressive California, it is unlikely to pass nationally under the current administration. According to Panetta, however, there are both Republicans and Democrats in Washington who recognize the importance of protecting the environment, even as the current head of the EPA rolls back legislation.

“There are Republicans and Democrats, mostly from coastal states, that understand the benefits of our environment,” explains Panetta, elaborating that often environmental tourism is more beneficial for coastal economies than the extraction of their natural resources would be.

The Carmel High School grad is hopeful, noting that it is important to remember that there are people on both sides of the aisle who support environmental protection, regardless of the stance of the Trump administration. More than simply being optimistic, however, Panetta urges citizens to get educated and stay informed on the environmental issues of today, to remove their personal bias, looking at facts as just what they are: facts.

“I prove things through evidence, through information, not through emotion or ideology. That’s not how you get things done.”

“I prove things through evidence, through information, not through emotion or ideology. That’s not how you get things done.”

This extends to voters as well, he says, as it is just as important for citizens to remain educated and unbiased as it is for politicians.

“I’m all for people voting, but you need to be educated when you vote,” the congressman observes. “Make sure you have the information and the evidence, and don’t just base it on party or emotion.”

Though the country is in a state of division over environmental policy, Congressman Jimmy Panetta is optimistic about California’s future and has faith in the country’s democracy.