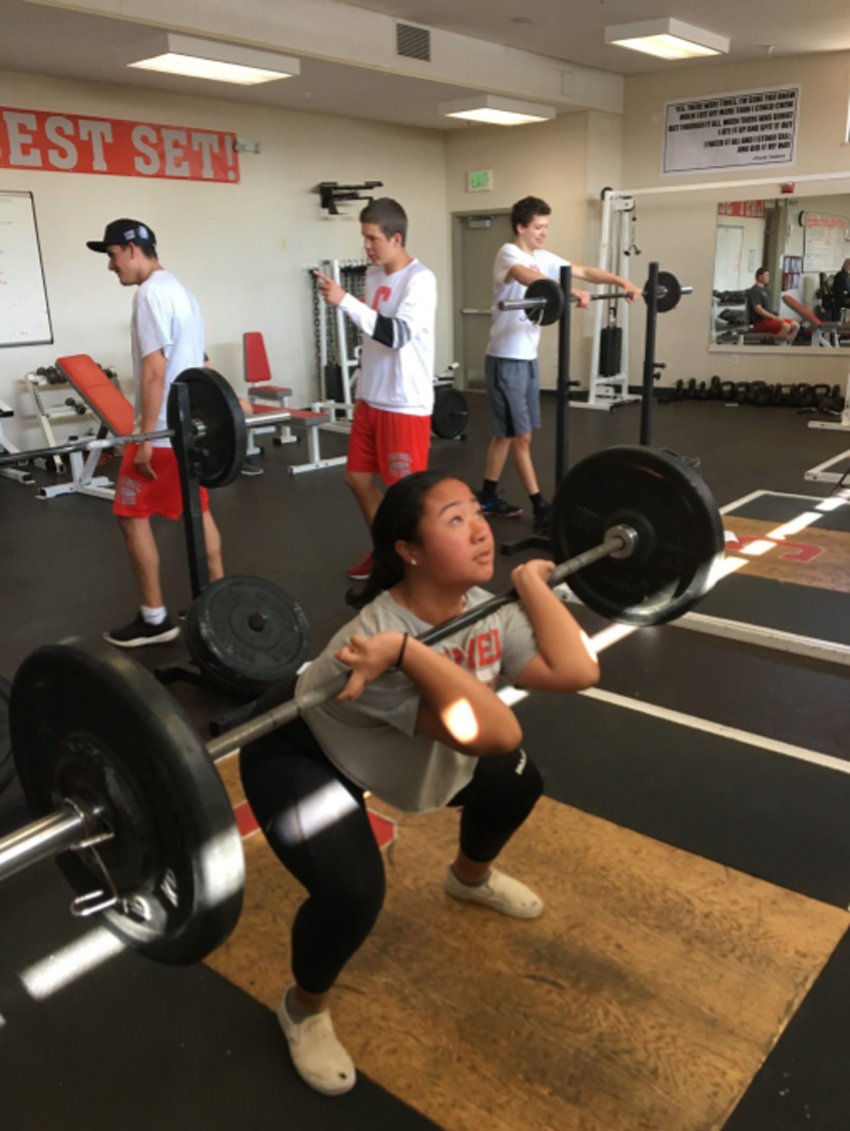 For the first time since Carmel’s Weight Training class was created over two decades ago, female students have entered a club of their own: The 350 Club. As of this school year, a number of junior and senior girls have mastered their skills and thrived in the class, practicing Olympic weight lifts and exercises daily.

Three of these students—juniors Celine Franklin, Sherille Tupino and Gaby Borges—are breaking the stereotype that it doesn’t benefit female students to take Weight Training, a stereotype long held among weight training classrooms across the country. This year, according to veteran CHS physical education teacher Craig Johnston, there are more females enrolled in Weight Training than in the first 10 years of the class combined.

While most students participate in Weight Training because they want to stay fit or have fun with classmates, incentives have been included to push students to the limit. The premise of Weight Training’s exclusive clubs is simple: Add together the amount in pounds that an individual can bench, clean and squat, the three major lifts in the class. If that final sum exceeds 450 pounds, you’ve entered the club. The same goes for each subsequent club, all the way up to the 750-pound club.

Under Johnston, an effort is being made to recruit even more female students to join the class.

“It’s been a real priority last year to just get these girls involved,” the teacher says. “This is a great example of some young ladies who put themselves in an uncomfortable situation, and they thrive.”

The elective was taken over by Johnston in 1990, but different weight lifting clubs students could enter didn’t come along until 2004. The only problem, however, was the lack of girls willing to take the course. Those groups introduced in 2004 were only for CHS boys. For years, there was no room for bragging rights, no exclusive clubs and no free tee shirts for young female Weight Training students at CHS.

“I kept asking Coach J, ‘Is there a possibility to make it to the 550-pound club?’” Tupino remarks. “I was trying my best, but by the end of the year, I only got to 480. By then, Coach decided that there needed to be a club for girls.”

Tupino, who’s now taking Weight Training for her second year in a row, has become one of the first girls to enter the newly created clubs. Tupino doesn’t just credit her own work ethic when the topic of the 450 Club comes up—her coach, her classmates and her friends are cited as well.

“I’ve always wanted to go to the gym and start working out, but I never had a partner to do it with, and I didn’t want to go to the gym with all the guys and adults, but coming to school and getting to do it with my peers is pretty great,” says junior Catherine Singler, who works closely with Tupino during their third-period class, along with Franklin and Borges.

Among CHS 130 students that take the Weight Training course over four sections, there are 11 females. But according to students who train every day in the class, girls who ignore the class due to a fear they will “bulk up,” are simply making a mistake. Multiple girls taking the course, like Franklin, a new addition to the 350 Club, cite how they’ve felt benefits in their everyday lives.

“It’s a really good way to release negativity that gets built up,” Franklin adds. “I’m keeping up with being an overall healthier person, and I’m really glad that I took the course. I’ll definitely be taking it again next year.”

Franklin mentions how taking Weight Training allows her to noticeably excel in water polo and swimming. When Johnston introduced clubs for the girls’ records this year, she was determined to make it into one.

According to the girls who put so much work into the elective, they’ll continue to push even harder inside and outside the classroom.