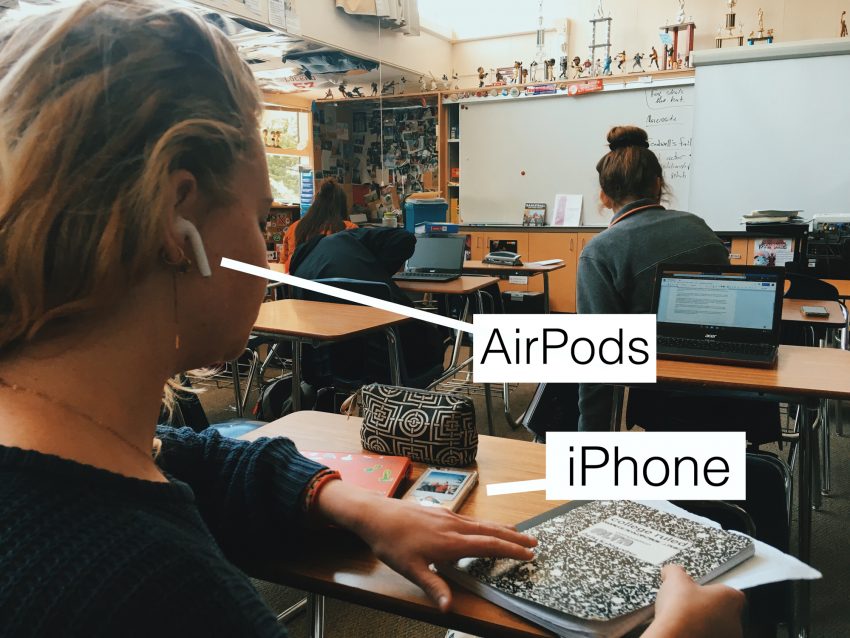 Apple iPhones have taken over the smartphone market as teenagers’ first choice in phones, apparently because of a need to upgrade outdated devices, a process driven by peer pressure.

The majority of students at CHS have followed a pattern: They first got iPhones when they were young because it was the most popular phone at school to have and user-friendly.

“I think that so many people have iPhones and use AirPods and Apple products because people did it before them, and it caught on,” junior Severen Scarlett says. “When our generation first got phones, the iPhone was the biggest thing on the market. People kept buying new iPhones when they came out instead of switching over to an Android or Samsung because they already knew how they worked.”

The majority of other students followed the herd and got iPhones as well, but once Apple nixed support for some of the older models, newer phones became necessary in order to have an operating smartphone. Yet despite the pressure enveloping students to have an iPhone, some Carmel teens have ignored the call and chosen to not use smartphones at all.

Senior Colleen Lang has chosen a flip phone over something more high-tech because, she says, it’s given her a sense of control over where she is spending her time. She actually used to have an Instagram account, a popular social media platform, on her school computer, but deleted it after seeing no real need to connect with her friends via an app.

“I love my flip phone,” Lang says. “It’s given me ultimate freedom in my life, and I can still have pictures and text, plus I have time to do my homework. All around it’s been the most freeing thing ever.”

Even so, through social media and on campus, 76 of 100 students polled by The Carmel Sandpiper have heard a popular question used to establish a social hierarchy among teens: “Does your phone have a home button?”

In 2017, the iPhone X was released, with a screen stretching to all four corners of the device. The absence of the home button was the most noteworthy thing about the latest iPhone, and with a retail value of $999, purchasing one of these phones displays one’s wealth—or one’s parents’ wealth—to whomever can see the screen. Parents don’t hesitate when it comes to getting their kids one of these high-priced phones, even though Samsung Galaxy phones range from $499-$899.

“I feel attacked when people ask if my phone has a home button,” senior Brittney Lukes says. “It makes me feel like I need an upgrade, but I don’t have money for that right now.”

The iPhone SE is the last model that Apple currently supports, valued at $80 if you want to trade it in with Apple, and Lukes has an iPhone 6s, released in 2015. Even though her phone is only one model away from being in the popular trend, she feels left out as a result of it.

Other students avoid the craze altogether.

“I don’t really see a use for [phones],” sophomore Nicole Giachetti says. “[My friends] talk over e-mail or meet up in person. I do have an Apple phone, although I’m not sure what type, but it doesn’t do anything. I don’t need it.”

A poll of 100 Carmel High students found 93 percent as having an Apple product of some sort, and 89 percent having an iPhone.

Kids who tended to have access to more money often opt for the newest phones, ones without home buttons, whereas other students work around the unsupported parts of their phones, such as battery life or software crashes.