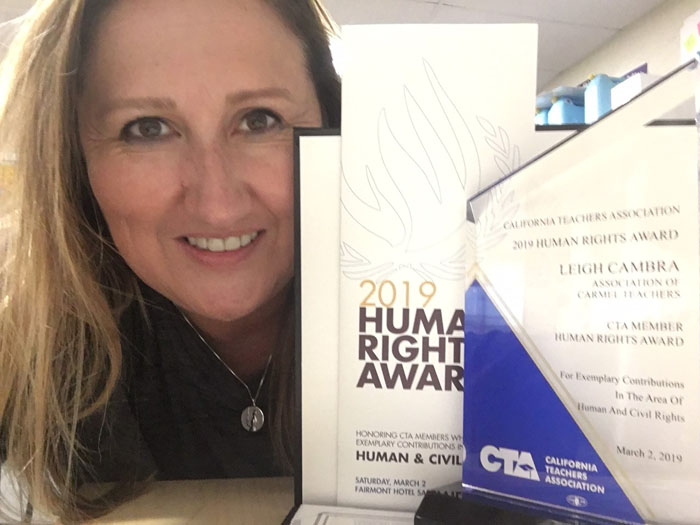 Carmel’s Health teacher Leigh Cambra has been selected as a recipient of the California Teachers Association award for human rights and will be recognized March 2 at the annual CTA Equity and Human Rights Conference.

The human rights award, given to eight recipients each year, was adopted by the CTA State Council in 1984 and awards recipients who further the development of programs that promote the protection of civil and human rights.

“I was nominated for inspiring service in others,” says Cambra, adding that another part was “bringing more service-based learning into the classroom and connecting students and teachers to being more civically engaged in the school.”

Cambra’s career at CHS began in 2006 after she came to Carmel from Palo Alto. Cambra grew up in Palo Alto and attended Cal Poly to gain her teaching credential, but her history of aiding others began much earlier: After Hurricane Katrina struck Cambra helped organize a weekend event to help stuff a semi truck with goods to be shipped out to Mississippi.

“Leigh has nominated so many other people around the school since she got here, and she’s always been about getting recognition for other people,” Schrier comments. “Of all people around here, I know of nobody who has had a greater impact in terms of empowering and helping the community than Leigh Cambra.”

The Palo Alto native is the advisor of This Club Saves Lives, a group that aids students and adults in need outside of Carmel High School by participating in service projects across Monterey County and taking a trip to Los Angeles every year to attend WE Day. The club began four years ago when a group of seniors and Cambra collaborated to put on the Thirst Gala, a fundraiser that raised over $3,000 for the Thirst Project, a nonprofit that aims to brings safe water to communities around the globe.

“It really all just fell in to place perfectly,” Cambra recalls. “Other people want to help, and we wanted to formalize it all as a club.”

“Our main goal is to help people in need,” says Ananda Sudol, one of more than 40 active members in This Club Saves Lives. “She’s incredibly intelligent. She puts in so much work and time in to help students. We love her!”