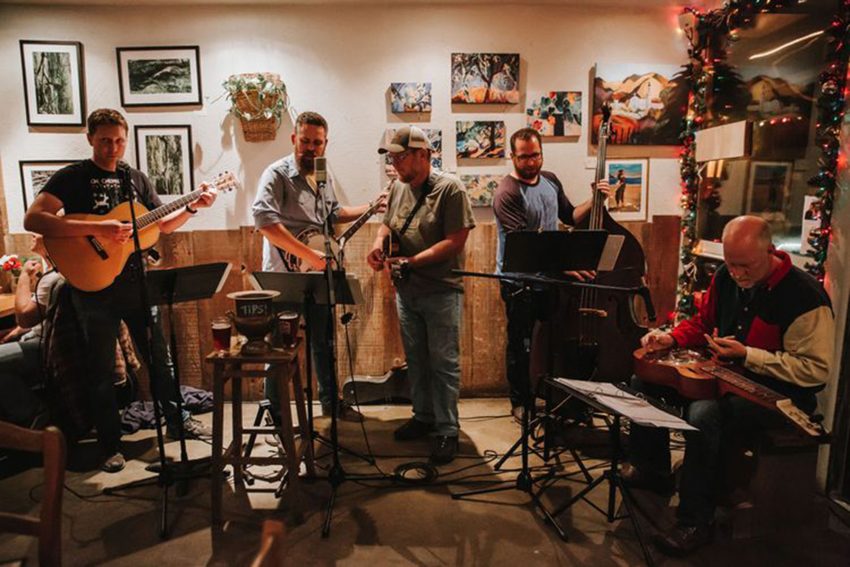 A collective and friendship years in the making

By PETER ELLISON
“We sit in my living room,” Carmel High teacher Marc Stafford says. “We decide what we want to practice. Oftentimes it’s learning a new song or going over something we haven’t quite nailed down yet. We hang out, we chat, we laugh, we play, we ask questions and really try to get into it.”

Families convene, gathering together in the warm Marina house. Well-worn instruments are pulled from cases before the attentive and laborious tuning process. Throughout the house there is laughter from the band, shrieks of joy from playing children and conversation from spouses at the kitchen table. These practices are at the heart of what the Bubba Pickens Band stands for, creating joy and laughter side-by-side with lifelong friends.

“I don’t even know what it is I love about it, but whatever it is I feel good about it,” says Mike Deckelmann, a math teacher when he’s not jamming. “Even at this age, we can sit around for four hours and work on a song, and I find that a very productive, exciting, four hours, to sit there and get it right.”

This community is the latest evolution and culmination of a decade-old dream from CHS staff members and friends, Deckelmann, Stafford, Jason Maas-Baldwin, and Brian Handley, along with their friend Steve Geer, an agriculture professional in the Salinas Valley. While the band officially formed in its current lineup in August 2018, the group has ties running back over a decade years. The band plays bluegrass music for gigs and fundraisers in a variety of places like the Trailside Café in Carmel Valley village, but the band’s first priority is an outlet for these teachers and professionals to pursue their musical passions in new ways amid managing their personal and public lives.

“It’s just about having a good time, and being a part of something bigger than any one of us, being part of a community,” Stafford says. “That’s what I love as a parent. My kids get to see that this is what music can be.”

The Bubba Pickens Band also acts as a learning environment for teachers that spend so much of their time regurgitating the same content year to year. Each member plays an instrument other than their original: Stafford, Deckelmann and Handley have started learning banjo, mandolin and dobro, respectively, while Maas-Baldwin, initially a trumpet player, is featured on guitar.

The band plays predominantly bluegrass music, which comes from the South with influences from jazz, blues, gospel and even old folk songs, and bands are traditionally composed of all-acoustic stringed instruments. The diverse musical background in the Bubba Pickens Band comes to light when the traditional melodies make way for open-ended solo sections before returning to three-part vocal harmonies.

The journey that brought these friends together started 10 years ago at a Carmel High talent show where the staff put together a rag-tag band for a short, four-song, set.

“That’s when we first got the moniker Far Below Basic,” Handley recalls. “At that time Mr. Clifford was involved, he was playing electric ukulele, Mr. Mello was onstage doing his best Will Ferrell impersonation with a cowbell and a shirt riding above his navel.”

While this configuration formed on a one-night-only basis, the music-making lit a spark that would draw these musicians together again and again. Emerging from this group was the Far Below Basic band playing R&B-centered tunes with Handley on saxophone, Maas-Baldwin on trumpet and the Deckelmann/Stafford duo both on electric guitar. This group continues to play, with a little student help, and add new faces from among the staff, most recently incorporating the piano and vocal skills of school nurse Deborah Taylor.

While the Far Below Basic Band was developing during this period, part of the inspiration behind the bluegrass focus of the Bubba Pickens Band was the creation of the Singer-Songwriters’ Guild in 2009. Stafford and Deckelmann acted as club leaders and mentors, but the two guitar players began to feel limited with the acoustic depth they could provide for the students and so bought or dusted off the mandolin and the banjo and set to work at becoming students all over again.

“It’s like playing upside-down guitar,” says Deckelmann, describing his experience learning mandolin. “But like anything else, like I say in here, it’s struggle, it’s experience. You make the same mistake over and over, and eventually you quit making that mistake. It’s a process, but that process is what’s fun.”

The band’s love for bluegrass music is a fairly new development in their musical lives, with Stafford and Deckelmann reporting that their interest flourished from listening to source material as a way of learning their new instruments. Maas-Baldwin describes his love for bluegrass emerging after going to the Telluride Bluegrass Festival in Colorado with Stafford. This interest in the traditionally homegrown, organic music naturally led the group to try their hand at making a band.

One thing led to another and the first show the band ever played, Handley says, was at a house party as the opening act for local musicians Pete and Ann Sibley. Needing a bass player, Stafford brought in an old friend from the music scene at Chico State: Steve Geer. While Geer is the only non-CUSD employee in the bunch, he’s essential in maintaining the group’s balance in rhythm and chord changes.

Since then, they have performed at a wide variety of venues and occasions around the Monterey Peninsula and have continued to develop a wide set of over 30 tunes, with constant additions on a gig-to-gig basis.

The Far Below Basic and Bubba Pickens bands played last at the Singer-Songwriters’ Concert for Whitney show March 1, performing an R&B set and a collection of Grateful Dead tunes as an effort raise money for the Whitney Grummon scholarship.

Deckelmann succinctly describes the Bubba Pickens experience: “It’s just a good excuse to get together, have a common goal and have fun together.”