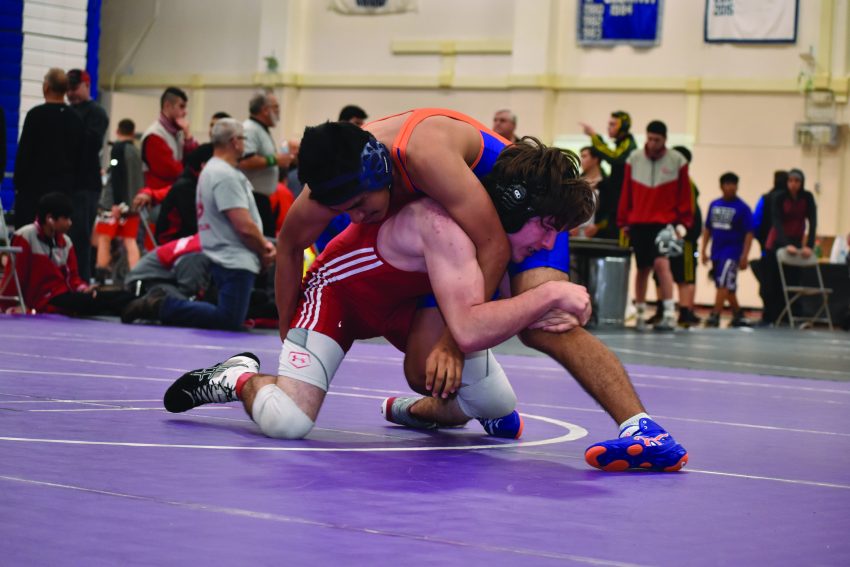 State-mandated hydration assessments are required for every high school wrestling program in the nation by the National Federation 2018-2019 wrestling rules to ensure that athletes are losing weight within a safe range. It then fits them into one of the fourteen weight categories, but this doesn’t prevent the dietary changes many CHS students undergo in order to lose pounds to fit into the lower divisions.

“We are very health conscious,” wrestling coach Russ Shugars says. “They’re not starving themselves or sweating off weight. I encourage never skipping a meal, and the boys are following the rules. They watch what they eat…and they put aside the sugar and junk food.”

At the beginning of the season, the 14 CHS wrestlers went through national hydration tests and required body fat testing in order to establish the minimum low of an individual’s weight. Some chose to maintain their bodies and practice normally, but others saw it as opportunity to cross the line into lower divisions and practice eating habits that may be unhealthy to reach that minimum.

“Since everyone is losing weight, if you don’t, you’re going to be wrestling people that are a lot stronger than you,” junior wrestler Michael Meheen says. “If you’re in your weight class and you have a lot of fat, then you’re going to lose to the people who came down a class with a larger muscle-to-fat ratio.”

Meheen says he has been eating limited amounts of food under his necessary caloric intake, explaining that other wrestlers don’t eat anything on the Thursday and Friday before tournaments on the upcoming Saturday.

“As a coach, the term I like to use is that we get to our fighting weight,” Shugars says. “It’s where you’re lean and trim, but not so much that you are unhealthy and can’t wrestle right. If you do cut like that where you go two to three days without eating, you won’t wrestle well.”

Yet according to sports medicine teacher Matt Borek, food isn’t the only thing wrestlers are cutting down on: Wrestlers are becoming obsessed with cutting water from their diets as well. Coaches check their wrestlers’ dietary habits by weighing them in before every competition, and with the assistance of the California Interscholastic Federation, athletes are limited on how much they are allowed to lose.

Central Coast Section guidelines note that it is imperative that the school’s wrestling coach monitors each athlete throughout the entire season to ensure they are maintaining or losing weight properly in a healthy and safe manner.

“The [California Interscholastic Federation] also regulates what types of techniques can be used to cut weight,” says 2018 CHS graduate Diego Cabrera, a former wrestler. “Of course, when people want to wrestle to get those team points, CIF regulations will not stop them from doing so.”

Cabrera adds on that there is a seven percent minimum body fat that every wrestler is required to meet, and it is encouraged that players eat healthy and cut away all the processed food and foods high in sugar. When his teammates were a few pounds over a couple of days before the competition began, he says they would resort to methods like fasting and would stop drinking water altogether.

“The CIF bans the use of sauna suits in duels and tournaments as well as other dehydration tactics,” Cabrera says. “The use of steroids is of course prohibited. If an athlete is lower than the minimum weight they were given at the beginning of the season, they are not allowed to compete because they do not encourage excessive weight loss.”

“My natural weight fits inside a weight class I am happy with,” senior wrestler Aidan Cash observes. “Other guys who are trying to lose weight sweat it all off, won’t eat the day before competition, and after their weigh-in they will eat stuff and get their energy back.”

Wrestlers at CHS are technically losing a safe amount of weight, but the ways in which they are doing so can possible result in safety issues. While Borek says that no one has gotten seriously injured from their attempts to make weight, he still doesn’t think the methods some wrestlers are doing is beneficial to their health.

“The problem I have with cutting weight is that if you put it in context of being like a car, they need to run on gas…they need fuel,” the trainer says. “Wrestling is a very demanding sport, so when you aren’t putting any fuel into your body, you’re running on fumes. I don’t agree with it.”