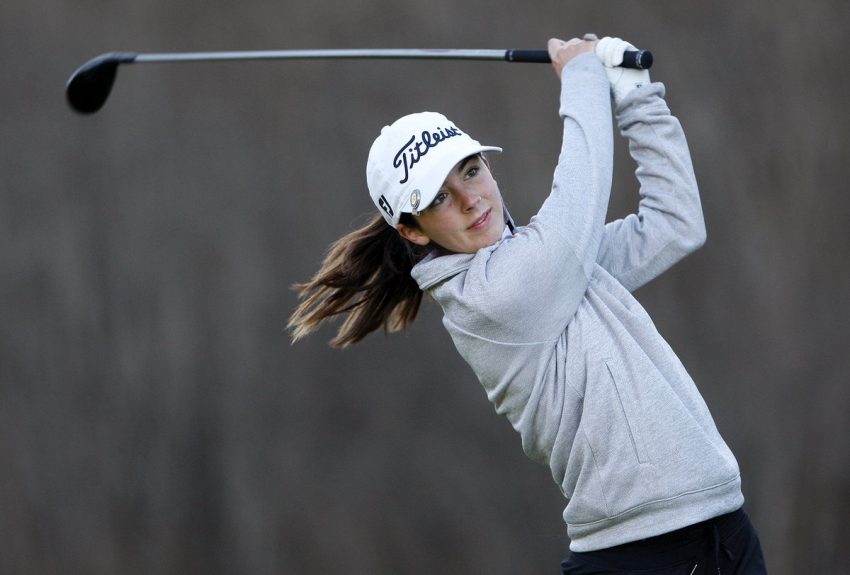 Similar to athletes on large sports teams such as football or basketball, getting scholarships for female golfers at Carmel High has never been an easy task, yet there remain unclaimed athletic scholarships which can be captured if certain paths are followed.

One of the nine girls on the 2018 Carmel High girls’ golf team, senior Lauren Hickam received an athletic scholarship for California State University San Marcos this year. Prior to this, CHS only had three other girls be offered a college scholarship for golf: Kaley Kinoshita (2015), Emily Tenneson (2017) and Christine Walker (2014), who had to play on the high school boys’ team and ended up securing a scholarship to the Naval Academy.

Hickam is planning on taking the athletic scholarship and attending CSU San Marcos, with whom she will be signing within the next week, and current junior Brenna Ozel could also be capable of receiving one of these scholarships next year, according to golf coach Ross Kroeker.

By disassociating herself from Carmel High and competing as a single player in the Junior Tour of Northern California competitions, the soon-to-be CSUSM freshman says that she followed the pattern other golf athletes were taking to get their scholarships.

“It’s a whole process to get recruited for a school,” Hickam says. “I emailed a bunch of different schools to see if I could get in and [CSUSM] got back to me so I went down to them to visit, and I really loved the campus and coaches.”

A reporter for Sports Illustrated and writer for Golf Magazine, Alan Shipnuck agrees that this is the best method for female golfers to get these athletic scholarships. He explains that for the majority of golfers receiving the athletic scholarships it depends on outlying factors, and it means that playing in high school matches just isn’t enough.

“It’s a tough situation because it’s hard to get recruited playing high school matches,” Shipnuck explains. “The coaches tend to gather in the summertime at the United States Golf Association. They run the U.S. Open and big professional tournaments but also the most prestigious girls’ junior matches, which are really important events for young golfers to get noticed.”

Golf is also one of the rarest sports at Carmel High, for both men and women. Shipnuck suggests that for women it might be the stigma surrounding the fact that golf is a sport for older country-club men, whereas Kroeker explains that it’s just a sport people generally pick up later in life because it takes so much work to get good at it.

“If you want to play in college you must have a passion for the game that allows you to commit many hours of time to practice and play!” Kroeker says. “In college, players should expect to spend about 30 hours per week playing golf on top of your school work. Golfers that have played on a high school team understand the commitment that is required.”

The scholarships typically been claimed by high school golfers have been academic scholarships, which are more competitive because GPA and community service are considered more highly.

The Carmel High golfers definitely put their time in. According to Golf Week, an 18-hole game of golf takes four hours to play through, something that holds true for CHS competitions. On Oct. 30, the Central Coast Section golf competition occurred at the Laguna Seca Course and took the entire school day.

Carmel students have access to the opportunities that come with living so close to Pebble Beach. Last year, six different students received scholarships from the AT&T Pebble Beach Junior Golf Association, including Carmel High’s West Whittaker and Zach Hays, but only one of the students was female.

Along with the AT&T Junior Golf Organization, other foundations such as Youth on Course, the First Tee of Monterey County and Quail Lodge Men’s Golf Association also donate money to students wanting to play golf in college.

According to Shipnuck, Kroeker and Hickam, if female athletes are looking to gain a scholarship for golf there are a few things they should keep in mind. They need to branch out and away from just the high school team, they should be dedicated to spending time to get better and perform on other golf courses, and they should talk to their coaches about which combinations of possible recruiting colleges and scholarship organizations would work best for them.