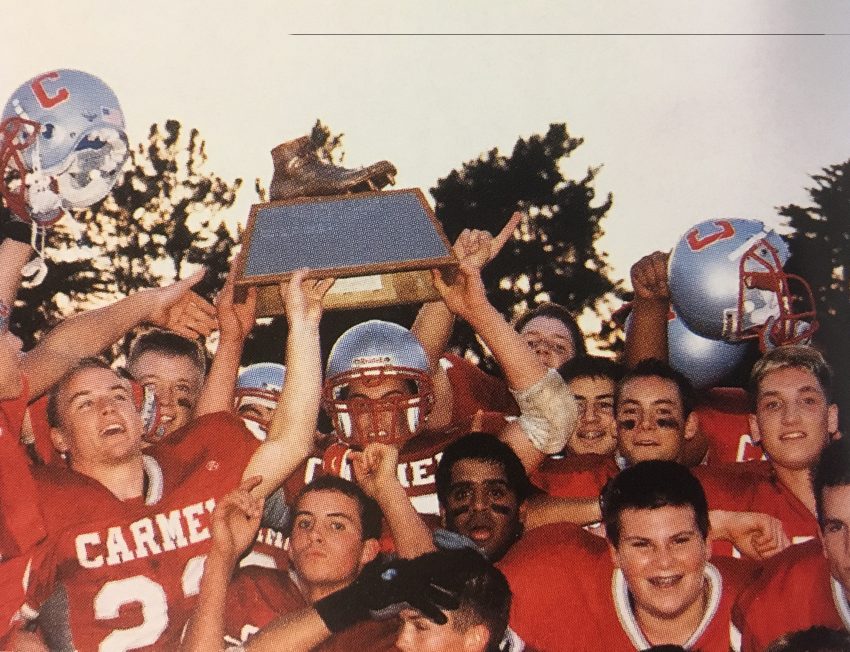 Pacific Grove’s origin story of the legendary Shoe tells a tale about a lone track shoe left on a muddy field after a game in the late afternoon, no owner to be found. But Carmel High actually holds the foundation of where the Shoe came from.

Circa 1948, three students by the names of Jim Hare, Tom Handley and Dick Weer wanted a symbol that would result in the perfect dispute within the rivalry between the Carmel High Padres and Pacific Grove Breakers. They came up with the idea of bronzing CHS teacher and athletic director Lloyd Miller’s shoe to serve as a trophy given to whoever was to win the annual, long-anticipated football contest between the two schools. It was titled the J.O. Handley award after Tom’s father, who paid for the shoe to be bronzed and put onto display for decades to come.

In a more contemporary setting, Carmel High students post banners displaying how ‘P.G. can’t hang’ as a means of informing incoming freshmen of the rivalry they too will become dedicated to preserving.

Seventy years and counting, CHS and PGHS fight for the ultimate bragging rights of a bronzed shoe, the trophy awarded to whoever wins the football game known county-wide as the Shoe Game.

“The Shoe Game was a chance to play your crosstown rivals in front of a lot of friends and fans,” former CHS head football coach Craig Johnston says. “It was fun to play them the last game of the regular season for the league championship and the Shoe.”

Plaques surrounding the trophy base of the Shoe are engraved with every year’s winners, fitting only a decade on each plaque. They are replaced once the oldest gets filled up, and the trophy belongs to whichever school has the majority of wins on the given plaque.

Carmel Valley native Jeff Wright, a former teacher and student of CHS, played in the Shoe Game during his senior year in 1963, went on to coach the football team for CHS and is now considered an expert on everything related to the Shoe Game.

“The rivalry between CHS and P.G. is the most natural thing ever,” Wright says. “They’re both small schools in the same community and are both really dedicated to the game.”

The Shoe Game is a staple of the Monterey County, leading Gonzales High and King City High who have their annual Battle for the Megaphone, the individual student bodies working together to form their own set of rules and guidelines for how everything plays out.

“If you talk to both sides, winning the Shoe Game means bragging rights forever,” Monterey Herald sports reporter John Devine says. “Alumni from 20 years ago still talk about playing in the Shoe Game.”

This year, the sports teams at CHS and throughout the county were sorted into different leagues than in previous years. It didn’t just affect football; field hockey and cross country are also experiencing changes in their own events, struggling with larger competitions and bigger meets.

“I think the teams not being in the same league for the first time in 60 years this season could either be a plus or a minus, depending on what’s at stake in Week 11,” Devine says.

“As a coach, you’re just trying to put the guys in the position to be successful in that game because it’s so important to so many people,” current Carmel head coach and athletic director Golden Anderson says. “More people care about that game than other games.”

Joan Lucido is a resident of Pacific Grove, but was raised in Carmel. She graduated from CHS, but once she moved to P.G. as an adult, both of her kids attended Pacific Grove High School. Her son played football and was heavily involved in the Shoe Game, and her daughter was a cheerleader for it, so when the annual Shoe Game comes around it’s a huge deal for the Lucido family.

“It’s one of the biggest things that brings our family together,” Lucido says. “We plan around it.”

Once the Shoe Game ends, the field is covered in red, gold and gray as students swarm the players. The winning schools earn bragging rights that will last the whole year.

In the 2017 game, Carmel students threw red chalk above the student body as the buzzer rang through the stadium, school spirit for CHS never being more intense. Pictures of the football players holding the Shoe are blown up all over social media, along with crowd selfies painted with red and gray.

Currently, the J.O. Handley award, known as the Shoe, is displayed in the main office at Carmel High, dozens of students and faculty walking past and remembering Carmel’s great victories every day. Carmel will host this year’s contest Nov. 3 at 2 p.m.