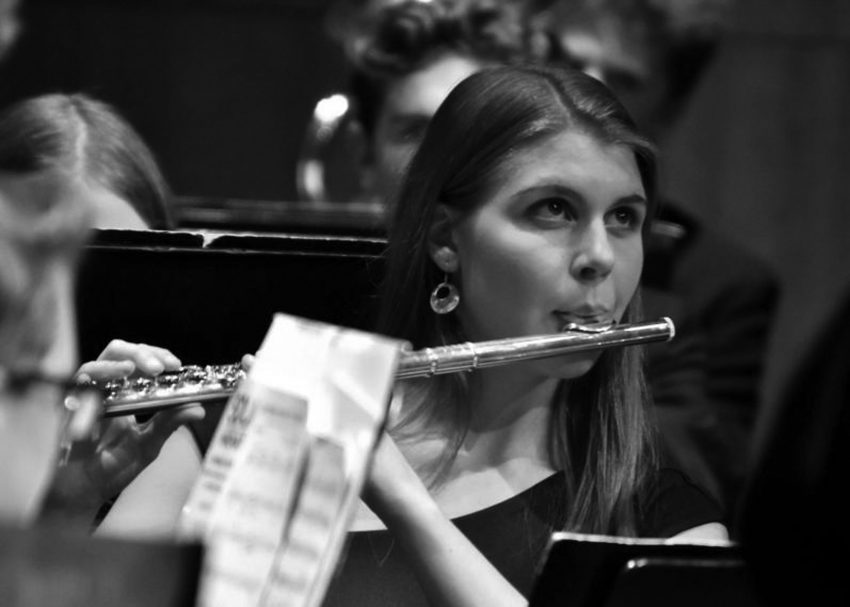 Through a program for beginning band students at Carmel Middle School, trips to Mexico and her own experiences in high school music, CHS senior Sophia Buraglio inspires and educates from the preschool to high school level to connect with students and prepare for a future career in music education.

Buraglio has become the first Carmel High student to create her own independent study program working as an all-purpose clinician for beginning band students at CMS every Wednesday during seventh period, hoping to pave the way for students in the future to do the same. Wanting to go into music education as a career, she has learned about the profession from her program and her own observations as a student of Band teacher Brian Handley, Choir teacher Tom Lehmkuhl and CMS music teacher Sarah Prusasky.

“Sophia is making sure to take Choir, Guitar, Digital Music and plays in Jazz Ensemble and in pit orchestra,” Handley says about his pupil’s proactive attitude toward a future music career. “I decided I wanted to be a music teacher in my senior year of high school too. I did none of this.”

Buraglio, who has gone to Mexico for three years with a church group, feels that her music experience can help bridge the language barrier between volunteers and young kids at the day care program they run. Buraglio believes that getting to interact with children of various ages has helped her realize her ultimate goal of teaching music education at the high school level.

“I feel like high school can be a really formative period in someone’s life,” she says. “I’ve had some teachers who have really helped me through that growth process. That’s what I’d like to do with my students.”

Buraglio had an early start with music. As a child, her father decided not to introduce her to popular kids’ music; rather, he played Frank Sinatra and Jack Johnson, two of her all-time favorite artists. From those times in her early life, Buraglio developed a love of music that started with late nights of jamming with the family CD player to her first piano lessons in second grade.

Though piano was technically her first instrument, it wasn’t her favorite. Still, piano provided the basic music theory foundation she needed to begin playing flute in fourth grade following inspiration from “The Blues Brothers.”

In total, Buraglio plays piano, flute, guitar, ukulele, piccolo and saxophone—six instruments, although other than flute, she solely plays for personal enjoyment rather than sophisticated technique.

“She is incredibly driven,” comments senior Olive De Luca, her peer in concert band, “and refuses to stop working on something until she has perfected it to the best of her ability.”

Buraglio, who this year joined the CHS concert choir, finds the overlap between vocal music and instrumental music fascinating, especially enjoying the air stream manipulation required for different instruments and the fact that every new facet of music brings on a set of new challenges.

“She carries herself really powerfully, but she’s not overbearing,” mock trial coach Bill Schrier says. “She has an unparalleled work ethic. She’s the real deal, Sophia Buraglio is.”