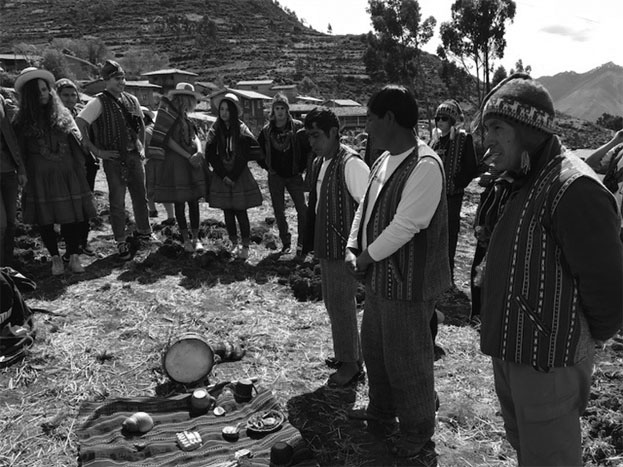 Many individuals only dream of an opportunity to make a profound difference in the lives of those who struggle in distant lands. This, however, was not the case for a contingent of 21 students who over the course the 2018 summer, embarked on a language immersion trip like none other. The location: Peru, a country known for its extensive Inca culture and the bristling peaks of the Andes Mountain range.

The joint Pacific Grove-Carmel High School group spent 10 days traveling across the country, with five of those days staying with local families, spending numerous hours immersing themselves in Peruvian traditions and culture, interacting with the indigenous people and performing chores and labor.

“Within a town called Misminay, the people lived completely off the land,” CHS junior Kristen Anderson says. “They plowed their land with animals and knitted their own sweaters with wool from the local markets.”

Trip organizer and CHS Spanish teacher Tricia Bean commented that the idea of a club raising money was conceived chiefly by the students following a visit to a Peruvian school.

“The students noticed internally that they were far more privileged than the local children, especially upon discovering that the school bathrooms lacked toilet paper as well as toilet seats,” Bean says. “The students then wanted to establish a club to be able to support the local Peruvian school financially. Goals of the students are to fundraise basic school supplies, basic amenities such as toilet paper, as well as recreational equipment consisting of soccer balls and soccer nets.”

Contrary to popular belief, problems facing rural Peruvians are not only rooted in a lack of jobs.

“In the town of Cusco, the locals only speak the Native Inca language Quechua, which makes it especially challenging for them to communicate with other townsfolk and find jobs,” Anderson says.

While being known chiefly for its natural beauty, Peru also happens to be one of the poorest countries in South America, with its rural poverty rate at a staggering 44 percent according to The World Bank, a consortium of countries working to eradicate poverty.

“While the locals did face many problems that we don’t have here in America, they were incredibly content despite their circumstances,” says junior Maxmillion Afifi, a co-founder of the Pacific Grove High School Peru Club. “I don’t believe that the locals need much assistance. I think they simply live differently than I do. If anything, they only need school supplies.”

While there is not presently a Peru Club in existence at CHS, the cooperation between students at CHS and PGHS creates ample opportunity for more outreach and fundraising projects to be organized in the future. The joint Pacific Grove-Carmel High School Peru Fundraising Booth is slated to be present at this year’s Shoe Game.

Students who wish to make a donation or have an idea to pitch are encouraged to contact Tricia Bean at tbean@carmelunified.org.