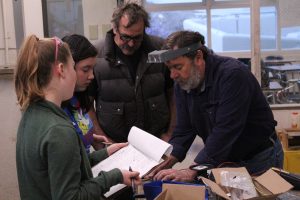 In 2005, Paul McFarlin and seven Carmel students created CHS’ first robotics team. Now, more than a decade later, Carmel’s robotics program has grown into an institution that will surely reflect McFarlin’s legacy after he retires at the end of this school year.

Carmel’s robotics team now has over 50 members, including a large number of underclassmen, implying that their numbers will only grow as the years advance.

Before moving to Carmel to start the Robo Rockin Bots, aka Team 2035, McFarlin gained experience in robotics at his former school, located in Los Angeles.

“We started Team 599 in 2001,” McFarlin says. “I started with a physics teacher. It was his idea, I didn’t want to do it, but at the time my daughters were at the school, and he talked them into joining, so of course I had to help.”

Teams like McFarlin’s 599 and 2035—named such because they were the 599th and 2035th teams started, respectively—all compete in the international FIRST Robotics Competition, also known as the FRC, a contest that Carmel has excelled in since the program started.

“The second competition we went to we were in the finals,” McFarlin notes. “We’ve always been in the hunt, some years better than others.”

Although McFarlin is undoubtedly an expert in all things robotics, what makes the team great is their student-led nature; the automotive/engineering/industrial arts teacher is able to take a step back and let the students learn for themselves while simultaneously giving advice and answering any questions asked of him. This gives the team members a rare opportunity to use the most intricate machines the shop has to offer, such as the computer numerical control machine, a programmed tool used to make extremely precise cuts.

Team members also use dangerous machines like the band saw, a blade made from a continuous band of spinning metal teeth, without supervision. One can only imagine the horror stories McFarlin has accrued over the years, being surrounded by inexperienced teenagers and deadly pieces of machinery; unless you’ve ever had him as a teacher, that is, in which case he’s made sure to tell you every gruesome detail.

This freedom that McFarlin gives his team not only increases their efficiency, but also encourages great learning experiences for every single member of the Rockin Bots, from the coders to the welders. The educator has taught industrial arts, engineering, stagecraft and automotives for 39 years, and built 16 robots during his time spent between two schools.

This year, though, will mark the end of his long teaching career, from which he will undoubtedly be missed.

“He literally spends hundreds of hours each year on robotics,” explains senior Jess Small, a three-year member and team captain. “No words could describe how thankful all his students have been for him and how thankful our school is for him.”

“Paul’s willingness to help all the teams in the area have enabled FIRST robotics to grow significantly,” says Roby Hyde, Pacific Grove High’s robotics coach. “I still rely on Paul’s experience and facilities when I need help.”

McFarlin has lent a hand in starting teams from Seaside, Monterey, Pacific Grove, York, Santa Catalina, Stevenson and San Benito. In some way or another, the mentor has helped create nine of the Monterey Peninsula’s ten teams, and thanks to people like him spanning the globe, the FRC now has over 7,000 teams world-wide.

“McFarlin is a kind of his own: There is no other McFarlin,” Small says. “Without him, there would be no robotics on the Monterey Peninsula.”

As the coach of Team 2035, he spends countless hours working on the robot every year, although he is not the only one to put tremendous time and effort into the robotics program.

Small had to give up her spots on the varsity soccer and softball teams in order to fully commit to robotics. She also had to greatly diminish her working hours, moving down from two or three shifts a week to just one. As team captain, she goes to the robotics team’s Tuesday, Thursday and Saturday build sessions in their entirety, adding up to seventeen hours spent working on the robot each and every week. Many other team members also put tremendous time and effort into Carmel’s robot, though.

“McFarlin taught me that even if something seems difficult or outside your skill set, you can still succeed if you try,” says senior builder Jenni Redfield, another three-year member. “He focuses on inspiring and recruiting students to show them that they are capable of so much more than they give themselves credit for.”

Last year’s team captain, Andy Lambert, also has nothing but praise for her old coach, teacher and mentor.

“Overall, he is one of the most generous people I’ve ever met, and I would not have learned all that I did in high school without his dedication to his work and advice, both personal and career-oriented,” Lambert says. “If you ask anyone involved in robotics, they would agree how much he means to the team. He will be deeply missed.”

In 2017, Lambert submitted a piece about McFarlin to the Woodie Flowers Award, a competition within FRC that highlights one outstanding mentor per competition. While he did not take home this prestigious prize, the thoughtful and eloquent message McFarlin’s students made for him certainly shows a lot about his drive and his character.

“With his tremendous work ethic and kind heart, he has inspired thousands of students to persevere and keep building,” Lambert wrote. “Mr. McFarlin’s openness with students creates trust within the team, and…his friendly personality and humorous quirks let him connect with each student on a personal level.”

This year, more students have risen to the epic challenge the WFA presents, determined to give the coach they love the recognition he deserves.

“The humble mentor has dedicated his life to igniting a spark for engineering and robotics in countless students,” McFarlin’s students say in their heartfelt tribute to their coach. “He has touched the lives of thousands of people across California and the Monterey Peninsula.”

For this year’s robotics contest, robots must put milk-carton-sized boxes onto scales, some of which are low to the ground and some high up. The robots must be able to drive autonomously for some portions of the contest, although for most of the competition they are controlled by a human driver.

Team 2035 will compete in Sacramento on March 21 and Silicon Valley on March 28. 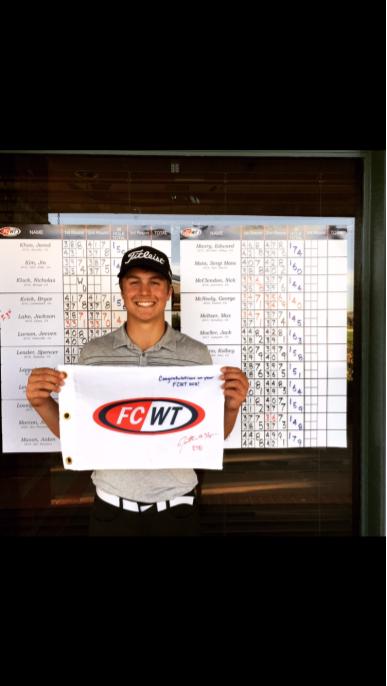