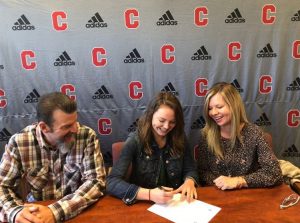 Senior Katie Godon (center) is joined by her parents as she officially signs with Southern Vermont College. courtesy of KATIE GODON.

On a late January morning, senior varsity letterman Katie Godon sat surrounded by her teammates, signing an agreement to play basketball for the next four years of her life at Southern Vermont College.

The Holy Grail for high school athletes looking to continue their athletic careers is a college commitment and scholarship. In order to achieve these goals, many Carmel students put in countless hours over the span of their high school careers. For some, the hard work pays off: 2016 CHS graduate Patrick Hungate was recently offered a full scholarship to play Division II football at Mercyhurst University in Pennsylvania after playing for two years with the Lobos at Monterey Peninsula College.

“It was a lot of work during the recruitment process,” Hungate says. “I spent hours watching game film to put together highlights and hours writing letters to coaches. After the coaches started contacting me, it became a little more chaotic than I thought it would be.”

For every success story like Hungate’s, others find the road to the green pastures of collegiate sports far more complicated than they had expected. While the process appears as simple as signing on the dotted line, numerous logistical problems can arise.

In November, CHS senior Dalton Quilty committed to play on the offensive line for the University of Puget Sound. Initially relying on a scholarship to make college more affordable, the four-year varsity football player did not get what he expected out of his commitment.

“You can definitely tell it’s a sales pitch,” Quilty says of the college recruitment process. “There’s always a financial aspect to everything you do in life. To be honest, I thought I’d probably get a little more, a couple thousand dollars or so.”

Despite differing results, the one constant for all of the student-athletes is work ethic.

“During my sophomore and junior year, every Saturday and Sunday I would wake up at 5:30 a.m. and drive to San Jose to make it for a 7:30 a.m. practice,” Godon says. “In July, my team would travel to Oregon for a four-day tournament and right after we would travel to Chicago for a five-day tournament.”

Sometimes, players find that the means of the hard work is not necessarily worth the ends of playing college sports. Take, for example, softball player Anna Buzan, a career .370 hitter for the Padres with a verbal commit to the Academy of Art University in San Francisco.

“The school is really awesome, and it’s all art there,” Buzan says. “That’s what I want to study so it was a perfect fit. However, after playing softball for twelve years and playing competitively for eight I got burned out.”

For those who do decide to play in college, the concept of playing professionally looms large.

“If the opportunity presents itself, I will definitely try to play football as long as possible,” Hungate says, “but the main focus is getting a good education and playing for my university.”

Another Carmel High alum, 2006 graduate Joe Parsons was offered a path to play professionally after transferring from a community college to a larger university. The right-handed pitcher was signed by the Pittsburgh Pirates in 2011 after playing his junior and senior years at Virginia Tech.

According to Parsons, there is a stark contrast between the recruiting process for recent high school graduates and those with a two-year degree.

“Getting recruited from high school is often a drawn-out process that takes months,” the former Gulf Coast Pirates pitcher notes. “Getting recruited from a junior college happens quickly. The whole thing was a whirlwind. If I remember correctly, I went from zero to five or six scholarship offers in a couple weeks.”

In contrast to high school players, who are scouted as four-year options, Parsons believes junior college recruits are short-term solutions to coaches’ problems.

“Junior college baseball players are almost like Band-Aids,” Parsons explains. “They’re typically brought in to fix a deficiency the coaches realize they’ll have for the next season.”

While some players like Parsons play professionally after college, they are in the extreme minority. For student-athletes, the former part of their title is just as important as the latter; athletics can be used as a useful conduit to create an affordable college option.

“I received a merit scholarship,” Quilty explains. “You basically get extra money for playing football, but it’s a ‘wink wink nudge nudge’ kind of scholarship.”

A football scholarship and the best possible education are not mutually exclusive, according to Quilty.

“If I’m going to pay $30,000 to go to a school, I’m going to make sure it gives me the most advantageous head start in life,” the 6-foot-1 center says, “so it doesn’t necessarily follow playing football. Getting the degree is the number one priority.”

Even though athletics can help a student earn an academic degree, the intense time commitment and work load can actually work against students, limiting their options.

“Because I attended three schools in four years, I was limited on the majors I could take,” Parsons says. “I wound up majoring in History, because it was one of just a few degrees with which I could graduate on time.”

For Parsons, a humanities major was the most feasible; with the time the pitcher had left off the field, a STEM major was too time-consuming to be achievable.

“This illustrates a dark aspect of college athletics, by the way,” the Virginia Tech graduate notes. “Even for a student-athlete who spends four or even five years at a given school, there’s a good chance he or she will be restricted on major choices.”

Regardless of where they end up, Carmel student-athletes who choose to continue playing say they love their respective sports, defining athletics as an experience that has shaped their lives and taught them important life lessons.

“I learned the biggest lesson,” Buzan says. “That I have to put my happiness before anything else.”