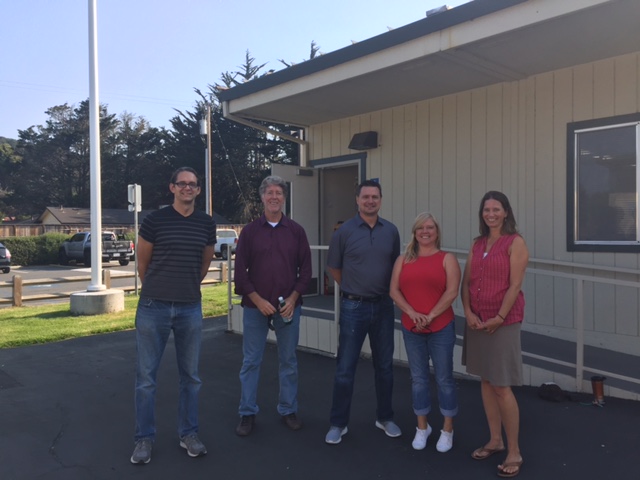 As a result of opened positions and visions of a high school consistent with their own, three of Carmel High School’s previous staff members—Brenda Buran, Jeff Schatz and Tom Parry—transferred to Carmel Valley High School this year, bringing their CHS-honed skills to CVHS.

“I applied for the position at CVHS once I understood that the vision for the school was going to be quite progressive and exciting,” says Buran, a CVHS English teacher and team member, now working toward rethinking the traditional concept of school.

It was this very idea that initially drew Buran to Carmel Valley High School: there can be an alternative learning process that coincides with the individual needs of each student, and the 5:1 teacher ratio at CVHS lends itself to deeper interactions with the students and potentially a deeper capacity for support to do just that.

With Buran’s chance to reshape the traditional school, the importance of student learning in concert with student well-being took paramount importance at CVHS, and she says the leadership of new principal Tom Parry supports Buran and the rest of the staff in this progression.

“We have a saying around here,” Parry says. “‘By name, by need.’ We foster an atmosphere of support, motivation and a sense of family.”

Honored by the chance to be privy to and participate in the progression of this school, Parry looks back to his position under current CHS principal Rick Lopez as a mentorship preparing him for this new position.

“Lopez was the best role model, and it was an honor to have my friend at the meeting where I was officially appointed by the board of education on May 3,” Parry says.

Parry’s transfer to CVHS was initiated by the retirement of previous CVHS principal of 20 years, Tom Stewart. Stewart told Parry of this opening before he officially announced his retirement and encouraged Parry to apply. At the end of his third interview, Parry was offered the job by new Superintendent Dill-Varga and immediately accepted.

In his current position, Parry is not just a principal but a teacher, which he describes as “the best of both worlds,” creating an even closer dynamic with the rest of the staff at CVHS, including former college and career counselor Jeff Schatz.

“[Schatz’s] experience as a counselor is invaluable to our system,” Parry says. “He was always someone I looked up to at CHS, and now I get to talk to him every day.”

Schatz continues to support students in their postsecondary goals at CVHS, but has also returned to the classroom, teaching science and math, which he did prior to becoming a counselor at CHS.

“I can’t recall who approached whom first regarding my transfer to CVHS, but I know that it quickly became apparent that there was mutual interest in my being part of the new team being assembled there,” Schatz says. “When I was offered the job, I immediately accepted.”

Not transferring to CVHS for the first time, but rather returning to her roots there, Tina Gerow, who spent 2016-17 at CHS filling in as Lopez’s administrative assistant, has returned to her position as office manager at CVHS.

“Tina is the heart of this school,” Parry says. “She is everyone’s mom, super supportive but not afraid to call you out if you need it.”

With four of the five staff members of CVHS spending last year at CHS, Shatz notes that the environment among the staff closely mirrors that of CHS. It is the students and the intimacy of the school that is really different.

Parry admits that when he began at CHS eight years ago, the notion among CHS students about those at CVHS was that they had failed their classes or were expelled from CHS—the perception was that CVHS was a place that students were made to go.

“That could not be further away from the truth,” Parry explains. “Students are attracted to CVHS because of its small class sizes, flexible schedule and the ability to work at your own pace. Students choose to go here.”

“Valley High is unique,” current CVHS junior Morgan O’Connell says. “The teachers give you freedom, but are still always there for you. It’s much more motivating than any other approach I’ve seen.

The intent of providing a 40-student maximum school is to ensure that all of its students receive a specialized learning plan as well as the individual attention needed to satisfy the social and academic needs of each student. Indeed, many courses taught at CVHS also meet requirements for admission to University of California schools.

Local bands strum together creating a collective to support each...

Community service opportunity in China open to all high school...