Alison Eastwood has spent the last five years dedicating her time to rescuing dogs and cats from high-kill shelters and placing them into adoption or no-kill housing.

She originally began her career following in her father Clint Eastwood’s footsteps as an actress and director. Feeling something was missing, she decided to put her time into something she finds more fulfilling: the Eastwood Ranch Foundation.

“Eastwood Ranch Foundation is a nonprofit that is an animal welfare and rescue organization,” Eastwood says. “We’re fairly small, but we do local dog and cat rescues from high-kill shelters in Southern California. We also work on behalf of animal welfare issues going on in the nation.”

Unlike other rescue organizations, the foundation works on more than just saving animals directly.

ERF holds annual fundraising events, such as the Fall Garden Party or the Art for Animals banquet not only to raise money, but also to spread awareness for animal welfare and rescue. According to Eastwood, ERF has helped more than 1,000 dogs and cats into homes in the Southern California areas since 2012. She also believes attention brought to the topic due to her fame can only help the animals. 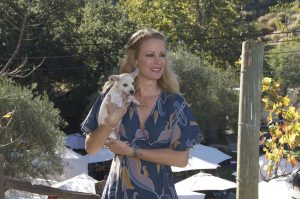 “Any sort of notoriety always helps any charitable cause,” Eastwood comments. “That’s just the world we live in. And I do think being in Hollywood has helped, and it’s helped for the better. I’m happy to use whatever resources I have to help more animals.”

She has always had strong ties to Carmel. Born and raised here, Eastwood spent the entirety of her childhood as well as parts of her adult life in Carmel.

Eastwood feels as though growing up in Carmel had a positive effect on her love for animals, saying, “I’ve always loved animals, ever since I grew up in Pebble Beach, California. I’ve just felt a kinship with nature and animals.”

Eastwood believes that Carmel is a great place to grow up, especially considering her passion of animal rescue, mentioning that the town is one of the ‘most dog-friendly’ places in the country.

“The whole environment in Carmel just breeds a love for animals and nature,” Eastwood says.

Although the actress has always thought of herself as an animal advocate, she realized many years ago that she could be doing much more than just donating money and fostering animals.

“I decided as an adult that I needed to do something that was more proactive and charitable. That’s when, about seven or eight years ago, I started it the process,” Eastwood says about how ERF was originally conceived.

As a founder of ERF, Eastwood takes care of an array of duties overseeing the entire nonprofit foundation.

“I’m head of fundraising, I work on public relations, actual animal rescue and foster, so I do a lot of different jobs,” she explains. “Everyone involved does lots of different things.”

However, Eastwood didn’t work alone on the creation of the animal rescue and welfare foundation. Co-founder and childhood friend Maissa Dauriac also plays a major role in the foundation.

“We actually went to Stevenson, both graduated from RLS,” Eastwood tells about the co-founder. “We’ve been friends since high school and started the foundation together.”

According to the official Eastwood Ranch Foundation website, Dauriac is a strong animal advocate and has been involved in animal rescue for over 10 years. She’s been an active member in multiple different welfare organizations throughout the years such as Farm Sanctuary, Chimp Haven and Born Free.

All donations given to ERF go directly to helping animals that have either already rescued or retrieving them from high-kill shelters. The foundation also uses their donations and gives the money to other like-minded organizations nearby.