As the tide recedes on the sunlit beach, the beautiful image is fogged by trash-covered sands that used to be clean. Carmel local Lauren Banner noticed this tragedy and decided to begin a project titled “Lovers of Carmel Beach” to combat it.

This will be a new, experimental cleanup for those who believe the mandatory once-a-week city cleanup is not enough to preserve the lovely Carmel shores. Banner says that she would go down to the beach the day after the city would do their cleanup and the amount of trash remaining was absurd.

The first Lovers of Carmel Beach cleanup occurred March 18, and beach cleanups will now be held three times a week on Wednesday, Thursday and Saturday. Banner is working on recruiting high school students who are in need of volunteer hours to come to her cleanups for a few hours each week.

However, those who are retired and living in Carmel are also encouraged to join the cleanup to make Carmel Beach a trash-free zone. 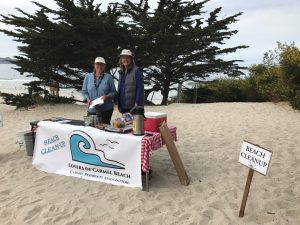 “The world is frightening; there is so much to do,” Banner says. “There are so many avenues where I realized if I just do this one beach and take care of where I live—one small bite at a time—then I can feel good about doing my part in the larger global pick-up.”

The Carmel Residents Association hosts beach cleanups on the third Saturday of every month and has decided to take Lovers of Carmel Beach on as the name of their cleanup. Banner has decided to join forces with them instead of having two separate cleanups.

“Last year in May, I went on a walk on the beach and was just dumbfounded at the amount of trash found: diapers, condoms, coffee cups, straws, paper towels, napkins, cigarette butts and more cigarette butts,” Banner states. “I have never seen it that dirty before.”

Banner is currently collecting donations to raise sufficient money to allow for vouchers, such as a paid lunch for volunteers. As of now, they have gathered $535. She has already spent some of the donated money on metal buckets that she will be handing out to be used as trash receptacles.

Currently, Banner is working on getting a drone to take pictures on the beach while the volunteers spell out words such as “beauty” or “clean.”

“It’s the sexiest job in town,” Banner says while joking around, while on a more serious note adding that the beach is one of our shared treasures and that we should protect it together.

There is a Lovers of Carmel Beach Facebook page with information and pictures of the cleanups, and those interested can contact Banner at (831) 620-2405. Banner is also on the lookout for out-of-the-box ideas to make her program as fun as possible. If you have any thoughts, feel free to email Banner at lcottrell@me.com.