As Big Sur approaches 3 to 4 million tourists annually, according to the visitor’s bureau website, residents continue to vocalize their concerns regarding the environmental degradation of the land.

Kathleen Novoa, known as “Big Sur Kate” within the local community, runs a blog and Facebook page dedicated to Big Sur news. She covers topics such as littering and illegal campfires in a section titled “Loving Big Sur to Death,” giving readers a sense of what residents seem to be dealing with.

“The biggest complaint and concern that locals have with the tourists, of course, are illegal campfires,” tells Novoa, adding that Big Sur is facing issues that are not just eyesores, but are also hazards.

James Bilz, the superintendent of California State Parks for the Monterey Sector, says that although he doesn’t have a number to prove it, the number of visitors has undoubtedly increased over the past five years and doesn’t seem to show any signs of slowing. 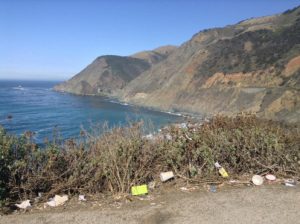 “It’s really just the degradation of our resources,” Bilz says regarding the visitors to Point Lobos specifically. “More and more people are just walking off trails or coming without campsite reservations and therefore are forced to park and camp on the side of the road or private property.”

Many residents have become passionate about the overload of visitors after it was determined that the recent Soberanes Fire that raged on for over 80 days was caused by an illegal campfire, according to Cal Fire. After the fire destroyed over 50 homes and threatened even more, locals aren’t sure that they want so many tourists making similar mistakes.

“People just don’t recognize that it is unique,” Bilz adds. “Point Lobos is a reserve. It is not a state park.”

In an effort to preserve the land, locals have been discussing different ways to prevent any future destruction stemming from the millions of annual visitors.

One plan, according to Novoa, is to completely cut off the highway for an allotted period of time. Although it would prove inconvenient for workers and residents in Big Sur, it would force visitors to go around rather than through Big Sur, which fewer visitors would be willing to do. That could immediately lower the number once it is set into action, but it isn’t certain to hold people after it reopens.

Another suggestion that has been discussed is to limit the number of people allowed in Big Sur, which is happening in many overused areas worldwide. When speaking with Novoa about this possibility, it is undecided how exactly this regulation would be monitored, although it is still considered an option if necessary.

Bilz, as well as others concerned with this issue, feel as though there could be smaller measures taken. Rangers and anyone else working at California State Parks or reserves could try to educate tourists on expectations and rules, as well as outdoor programs for youth to teach them the sanctity of the area.

“We may use a shuttle service to lower the traffic on Highway 1,” says Bilz, referring to a possible shuttle plan that would run to and from the Point Lobos Reserve.

“It may be that all three plans will eventually come to pass, and hopefully before Big Sur is utterly destroyed,” Novoa says.

The conclusion from residents and locals is to start small. Having signs posted or being told the expectations when entering a state park could be helpful to everyone on making the right actions, which may be the first step in solving this ongoing issue.