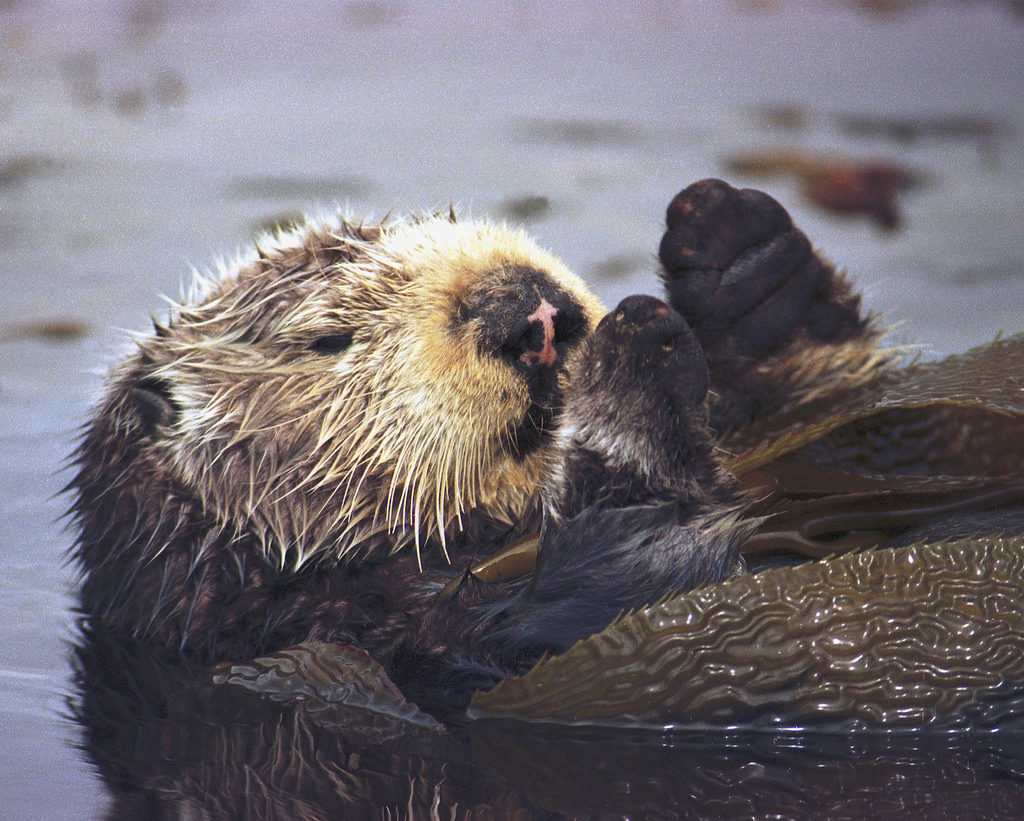 In the vast coastal kelp beds of Monterey Bay, sea otters are often seen snugly wrapped up, and these furry creatures featured their best year in more than a century with a 2016 U.S. Geological Survey reporting a population index of 3,727.

Michelle Staedler, sea otter research coordinator at the Monterey Bay Aquarium, says that sea otters could be taken off the Endangered Species List if population keeps rising at the current rate.

“Sea otters are considered threatened,” Staedler says, “and are listed on what’s called the Threatened and Endangered Species List. To remove otters from the threatened list, the otter numbers need to reach a threshold greater than 3,090 sea otters a year for three years in a row.”

“This disease is allowing smaller urchins that the stars would eat to grow bigger and become food for sea otters,” Staedler says. “Having more prey available in the form of urchins is contributing to a higher survival rate for younger otters and thus a higher population count.”

Michael Guardino, former science teacher and an experienced SCUBA diver, agrees with Staedler, but also believes there are more factors contributing to this positive trend.

“Population estimates fluctuate with oceanic conditions and our ability to accurately conduct a census,” Guardino says. “A population increases when natality is greater than mortality, so successful reproduction must also have something to do with it.”

Once, according to Guardino, the sea otter was a common marine mammal with a population of millions and a range from Russia to Baja California.

However, just about a century ago, California sea otters nearly went extinct due to large-scale commercial hunting for their valuable pelts. According to Guardino, in 1933 about 50 sea otters were discovered on a remote beach near Big Sur, which became the ancestors to most of our current otter population.

Guardino says that this small gene pool could lead to future challenges for sea otters.

“Otters on the central coast of California came from a remnant population that survived the Russian fur trade of the early 19th century,” the SCUBA diver says. “This genetic ‘bottleneck’ caused some inbreeding issues with lack of diversity.”

Although the overall population index climbs upward, the most northern and southern subsets continue to decline, which also raises some concern to sea otter conservationists. Guardino says that natural predators, pollution, disease, entanglement, gunshots and pups being separated from their mothers are all other causes for otter mortality.

Sea otter conservation efforts are run mainly by the state of California and the Monterey Bay Aquarium, which perform most of the conservation tasks from tagging sea otters to public outreach programs.

“The California Department of Fish and Game is responsible for the tagging and monitoring of sea otters,” Guardino says. “[Sea Otter Research and Conservation] at the Monterey Bay Aquarium is a major player in the effort to keep these animals wild and healthy. These agencies work together on the front lines of otter protection.”

According to Staedler, this recent success is just the beginning, and it will take increased conservation efforts in 2017 to keep the sea otters thriving.

“Sea otters are a keystone species, keeping the kelp forests in balance,” Staedler says. “Without the otter to eat the urchins, the urchins would eat the kelp and there would be no kelp. Instead, we would have urchin barrens: areas with starving urchins and no kelp.”