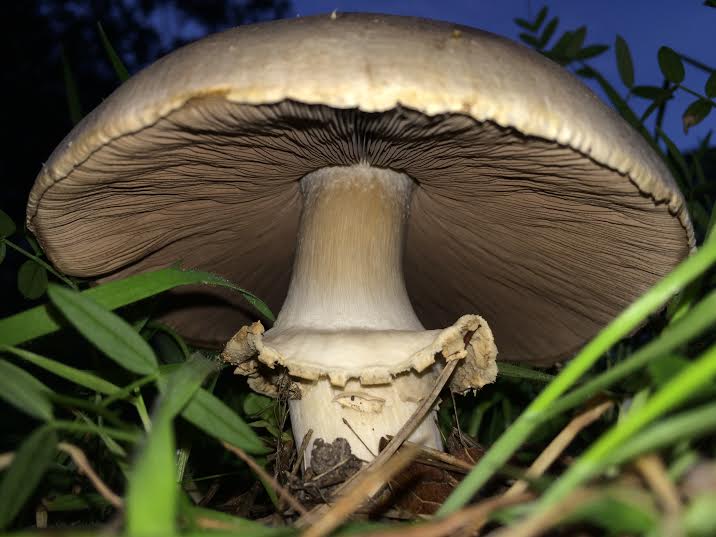 “When it rains, it spores,” is a common saying amongst mycologists (the scientific term for mushroom lovers). And while this mushroom season has reached a lull due to a lack of rain, there are still many mushrooms out there for both newbies and fungus fanatics to enjoy.

With this limited guide of mushrooms found thus far at CHS, you can now fulfill your mycological desires—and your appetite—but only with the greatest of care. The majority of mushrooms listed here are poisonous, though none are deadly. So, only consider eating mushrooms found at school if you are absolutely sure of their edibility and have consulted an expert.

On campus, the variety of mushroom habitats is fairly limited. However, the little patch of woodchips in the front of the school is one productive area.

The front of the school saw lots of action in late 2014, but most of the fungal blooms died away unidentified as the rains dried up. Courtesy of science teacher Mr. Buran, one clump of mushrooms was identified as a group of inky caps (Coprinus atramentarius): medium-sized, pointy, gray and edible, though this is not recommended (David Arora, the author of two leading mushroom field guides, used to eat inky-cap-and-salami sandwiches as a teenager).

If you take a look at this same location now, you can spot a clump of the so-called jumbo gym (Gymnopilus spectabilis), with both button-like immatures and full-grown adults. This magnificent, orange organism is best-known for its hallucinogenic properties, though those found on the West Coast seem to be inert.

Aspiring mycologists should also keep an eye out for fungal growths sprouting in the patchy corners of grass that border the school’s hallways, particularly by rooms 20-23. This area sported a much greater diversity earlier in the season, but now dried-up patches of velvet foot mushrooms (Flammulina velutipes)—small orange wood-rotters, edible yet bland—are all that remain.

The most lucrative location on campus, however, is the chill hill, the area behind the black gate on the east side of campus. This grassland, pine and oak forest combo retains a lot of moisture, and thus a lot of mushrooms.

Past the black fence and down the path to the right, one can find russulas (Russula sp.), both emetic russulas (R. emetica) and rosy russulas (R. rosacea), mushrooms with bright red caps, the first with a white stem and the other with a pinkish stem. These good-sized mushrooms are generally hiding under the pine needles surrounding the pine trees, and are far too peppery to consume without getting sick.

If you instead walk down the path going to the left, you will find the moister forest area. This area does contain one of the most poisonous mushrooms found on campus, the poison pie (Hebeloma crustuliniforme)—an insignificant-looking gray mushroom. In general, avoid eating little grayish mushrooms.

However, this grove is also home to a few clumps of mushrooms from the genus Agaricus, most likely the edible meadow mushroom (A. campestris), a large white relative of the common store-bought mushroom variety. And on the topic of edible mushrooms, a great fruiting of boletes (Boletus sp.) was also found on the chill hill— including both king boletes (B. edulis) and queen boletes (B. aereus), highly prized for their culinary worth. But unfortunately, these mushrooms died early on in the season, so not much is left of them anymore.

If you want to start learning about or collecting mushrooms, then you are not alone, as many kids and teachers at CHS—including our very own Mr. Guardino— are already avid fungivores and mycologists. And what better place is there to start at than your very own school?
-Ari Freedman